I Smell A Rat

Let the record show that The Pony and I don't always see eye to eye. However, he is mostly willing to have a discussion, or perhaps a debate, as we fling facts back and forth. We can both come out victorious, because if you look hard enough, you can generally find facts to support either side of an issue.

Anyhoo... it may come as a surprise to you that Mrs. HM does not like to wear a mask. Sorry. I should have warned you to sit down before mentioning that. Hope you've all regained consciousness by now.

The only two things that can entice me to strap on a mask are a visit to the doctor, where it's mandatory, or a trip to the casino, which has recently mandated masks due to a county ordinance. Every time I've worn a mask, I got a severe headache about 3 hours later. I tried to attribute the casino headache to a delay of my caffeine fix, or the smoke. But it's happened every time I wore the mask. I figure it's from breathing back my own mouth bacteria. I also had a sore throat. Not PAINFUL sore, but swelled-up, puffy, hard to swallow sore.

Anyhoo... that's just an explanation of my peccadillo. Not telling anyone else what to do.

The Pony has recently become a mask aficionado. Back in Norman, when everything was closed down in April, he didn't wear one. I even had to caution him to tie on a bandana or scarf to go buy some cough medicine and ibuprofen when he had a cold. Now, however, when the Devil's Playground started the mandatory masking (since changed to strongly suggested masking), The Pony jumped on the bandwagon. I daresay he might sleep in it, and shower in it, and float around in Poolio while wearing his beak. Which is what we call his mask, it having that shape, being a bright green one sent to Farmer H by his health insurance.

Now we'll get to the point. Friday evening, The Pony was leaning over the back of the short couch with his phone, while running his nightly bathwater. 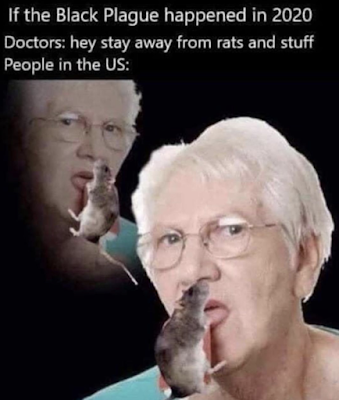 The Pony snickered. I did, too.

"Wait a minute. YOU think it's funny?"

The Pony must not have believed me. He read it out loud.

"Get it? It's like YOU, Mom. You know it's dangerous, but you're licking a rat."

"Oh. THAT'S what it is? I thought it was people like you, with RATS STRAPPED TO THEIR FACE!"

Tomato, tomahto. We both used it to fit our agenda.
Posted by Hillbilly Mom at 1:02 PM

I don't want to seem rude here, but I do find it quite funny how many Americans will go to great lengths to do specifically what they are told not to do. They will riot for their rights to do so.
We have a few of those same nincompoops out here too and I suspect other countries have their fair share. But it's the Americans who seem to do it so loudly. They're out there, loud and proud, to claim their rights to do what will harm them.

Oh, you and The Pony are having fun sparring. Parrying. Debating.

The meme IS funny. True (as far as what people are doing these days, despite the coronavirus) but funny.

River,
To be fair, you see what the media wants you to see. Heh, heh! Nobody is rioting over a mask, that's for sure!

Yes, some of us don't like to be told what to do, even with PROVEN safety mandates. The motorcycle helmet issue comes to mind. There will always be a few frogs who jump out of the pot, refusing to be slowly boiled to death, even if they jump into the mouth of an alligator.

***
Sioux,
Sometimes I can talk in circles, and get The Pony to voice MY position. I see it as a challenge!

Wearing my mask does not protect me. I do it to set a good example, since I insist that those entering my domain must do so. I don't wear one outside, but I do maintain a good distance between myself and others. I have ordered face shields for me and mine. They might not be as confining for breathing purposes.

Kathy,
I think face shields are a better option. The will do the same thing as a mask, blocking droplets, but allow you to breathe without a headache.

I worry that some people think a mask actually protects them from the VIRUS, and grow lax in other preventative measures like distancing and no face-touching.

I should have said SOME Americans, I certainly didn't mean all of you.

River,
We have a good share of them. It's one of our characteristics. Some people can hold it in better than others! Just like the characteristics of being overly-friendly, and bossy know-it-alls, and thinking the world revolves around US.