They Don't Make 'Em Like They Used To, But The Boxes Are The Same

Monday afternoon, I decided to treat myself to a take-out lupper. That's the meal too late for lunch, too early for supper. Farmer H was leaving for an auction at 4:00, so I didn't have to make his supper. I got a late start to town, and had to pick up medicine and some Diet Mountain Dew. I knew it would be almost 3:00 by the time I got home. So I drove through Hardee's for a taco salad. I haven't had one since last summer, I think. Every now and then, I'd bring them home for me and the newly-retired Farmer H.

Here's the thing. Several years ago, you could get a really good taco salad at Hardee's. They also have the Red Burrito menu. It's not just burgers like in the olden days. I'm not quite sure when they started downsizing their taco salad. Seems like it happened by degrees. At first, we'd comment that the taco salad seemed smaller than it used to be. But then we'd question ourselves. Were we comparing it to Taco Bell? Were we just gluttons who wanted it to be bigger? I don't think so. 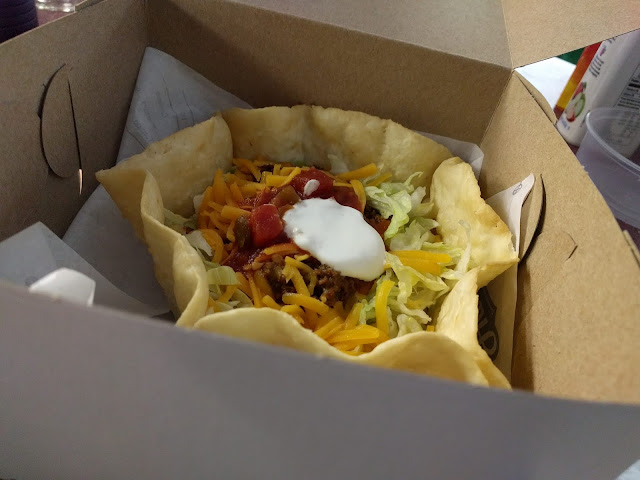 I'm surprised I could find it, hiding there in that cavernous box. That's the thing! Used to be, several years ago, that I'd complain when I got my taco salad home, because the minimum wage worker had crunched my shell closing the box, and my sour cream and cheese was stuck to the lid of the box! As you can see, that's not a problem any more.

You'd think they could at least use a smaller box now.
Posted by Hillbilly Mom at 1:10 PM

I would be ALMOST tempted to find out how they make those bowls out of the tortilla, and make my own taco salad.

That is a sad excuse for a taco salad.

Use a smaller box and crush everybody's shells again? Ha Ha. You could go in there with your open box and ask when did the salads get so small, is this an entree or a meal? Do they have a super-size me option? Bigger salad for just $1 more? It's bad enough when supermarket products are smaller for the same price, but fast food places shouldn't be allowed to do it too. Burgers from MacDonalds here are so small you no longer need two hands to handle them like in the original ads.

Sioux,
I've seen those contraptions in some kind of mail-order catalog that I get about 50 of each month. Can't remember the company. It's a metal contraption like an upside down muffin pan. You supposedly drape a tortilla over it and bake it. I'm sure it wouldn't taste quite the same, though... For its small size, this taco salad was at least tasty. I did add a bit more cheese, and a lot more salsa.

***
River,
At least with a smaller box, I'd THINK I was getting a larger taco salad. I won't be taking my tiny taco salad into the store to complain. No siree, Bob! I don't want to live in fear of REVENGE from the people handling my food. Just in case there's been no employee turnover when I go back in a year or two!

No supersizing at Hardee's! I couldn't believe the size of our breakfast sandwiches we got at a McDonald's on the way to CasinoPalooza 5. I even told Farmer H, while unwrapping his in the car, "I don't remember them being this tiny." It was the Egg McMuffin he had, and also the Bacon Egg Biscuit that I had. So both the muffins AND the biscuits have been downsized. They were about the diameter of a blueberry muffin. Not the size of a hamburger bun.

Hamburger buns have also been downsized. They used to be 4 and a half inches across and now are only 4 inches, plus thinner.

River,
That is highway robbery! I guess they think people won't notice. Like Farmer H and the McMuffin.