We have a plethora of yucca plants around the Mansion. They are Farmer H's handiwork. I had nothing to do with them, and I'd swear so in a court of law! I didn't even know what yuccas were until I met Farmer H. That's back when I rented a two-bedroom townhouse, and he rented a one-bedroom apartment across the parking lot.

As I recall, Farmer H had two yucca plants growing in front of his apartment. There was hardly any room there, and it was mainly gravel. But he'd dug down through the rocks and the plastic, and planted yuccas that he... um... found. That's right. It's not like you go out and buy them. Farmer H has a nose for yuccas like a pig has a nose for truffles. His prime hunting grounds seemed to be cemeteries and highway right-of-ways. Never anybody's yard! No siree, Bob! That would just be wrong! 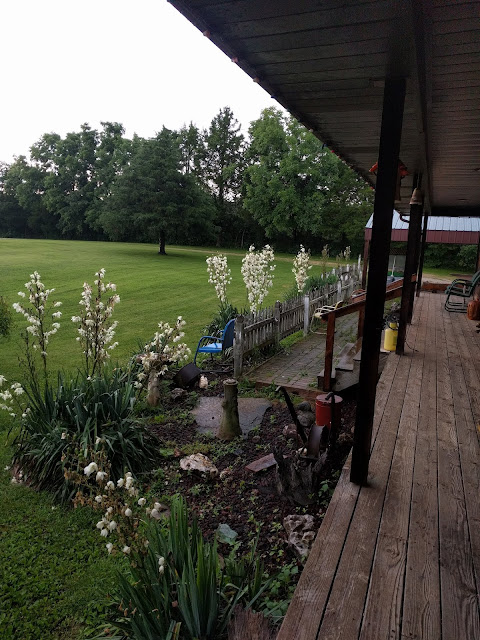 The picture didn't turn out so well. It was around 6:30 in the evening, after a thunderstorm. Some of the petals were knocked off some of the yuccas. Looks like Farmer H has some weeding to do in his rock garden. Looks like Farmer H knows it. He has his jug of weed killer sitting out. You didn't actually think he'd get down on his knees and pull weeds, did you? Or buy weed killer? Because I think that stuff is some left from when he worked, and mixed up a batch for the plant. Perhaps PLANT isn't such a good word to use here, when I am referring to his factory. 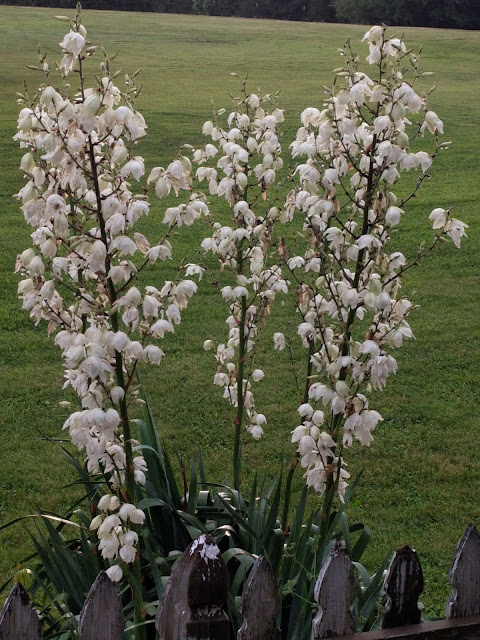 I also regret that the clinging droplets of rain don't show up on these petals. I could even see them without my glasses, but the phone camera didn't zoom in any farther. If you blow up the picture, you can see them. They were different colors, from the light refraction of the sunset.

So much for old Mrs. HM trying to get all artsy-fartsy!
Posted by Hillbilly Mom at 1:04 PM

Artsy-fartsy? One person's art is another person's fart?

I've seen those bushes/flowers/plants before, but never knew what they were called.

Now I know. I guess an old female dog CAN learn something.

Sioux,
I wasn't much of a doll-player as a child. More of a Jane and Johnny West action figure little gal, with their horses and wagon and plastic leather vests and chaps. But I DID have a Betsy-Wetsy. Now I wish she'd had a boy-doll cousin named Artsy Fartsy!

That picture turned out fine in my opinion, it's a very pretty porch/path/garden area. The yuccas look great. Maybe Farmer H could plant some ground cover creeper type thing in the rock garden to discourage or at least disguise the weeds. Something that stays on the small side even when fully grown so it doesn't go rambling across the lawn.

River,
I think he's more likely to douse the whole area with his POISON! He's a yucca and rock man, not a creeper man. It's hard to teach him new tricks.