The Oblivious Leading The Delirious

The Pony has been sick as a dog. He's off his feed. Barking morning, noon, and night. I kept him home from school for two days so he could hit the hay whenever he felt played out.

I normally don't let my kids stay home for trivial viruses and headaches and drippy noses. But that 102-degree fever was the kicker. Farmer H was here to tend to him, so I didn't have to expose my mom to Pony germs. He's fourteen, and could probably stay home by himself IF we lived in town, and IF my work was not 30 minutes away, and IF he could reach me by cell phone during the day, and IF he could get an actual person when he called the school office instead of an automated system, and IF there had not been a rash of daytime rural robberies in Hillmomba this month.

Of course, leaving The Pony with Farmer H is pretty much akin to leaving him by himself. With the exception that Farmer H would just choose one of his 30 or more weapons and commence to shootin' at thieves, then ask questions later. It's not like he's a personal chef, or an LPN, or even a childcare professional. But he does have one thing going for him that the others might not: he loves his Pony. So much so that he drove to town this morning (leaving the Pony home alone, of course) and bought him some donuts. And yesterday he scrambled up some of our very own chickens' eggs for The Pony's lunch.

As far as doling out medication, though, he's not on par with Collette Reardon. Remember her? That SNL character of Cheri Oteri, who was never hurtin' for prescription drugs? 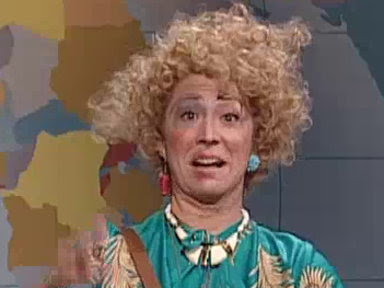 Yeah. Even Collette Reardon could have given The Pony his horse pills better than Farmer H. I left an index card with how often he could take what. And the time he last took something. I arrived home to find that The Pony had dosed himself not with a fever-reducer, but only a cough suppressant, had written the time one hour later than when he took it, and arose from his slumber with a fever of 100.9 degrees. According to Farmer H, The Pony had no fever, but was tired, so he took medicine and went to sleep. I don't mean to sound unkind. But it was a case of the Oblivious leading the Delirious.

Perhaps you can understand why I took The Pony to the urgent care clinic after I got off work Thursday, rather than have Farmer H take him to the doctor during the day. I could not fathom Farmer H correctly informing medical staff of The Pony's amoxicillin allergy. After all, he was not the one who had to take him to the ER the first time he had a reaction. To him, it would be a case of, "Well, we just won't give him any more if he breaks out," rather than seeing The Pony in his mind's eye, all bloated and red and unrecognizable, with ER nurses frantically trying to find a vein for an IV for an hour, then confronting the attending doctor over the benefits of a shot rather than an IV for children barely a year old.

Women have to be ever-vigilant when in charge of men or boys (they're more or less the same thing). The male of the species is--in actuality--just big, clumsy bears. Thank goodness you're there, HM.

I understand. He who is oblivious about his own meds should not be trusted to dose another. Never assume they will actually read the instructions. When any of the grandchildren are in our care, the last words spoken from our children are, "Mom, watch Dad."

Sioux,
Ain't THAT the truth! Like muddy, gamboling, St. Bernards or Great Pyrenees. Good companions, but the ones you want handing out the meds.

**********
Kathy,
Well, they never read the instructions for ANYTHING. Except the shampoo. Lather. Rinse. Repeat. That's why they go through it so fast.