It's All Fun And Games Until Somebody Loses A Beak

A couple weeks ago, I had to get rid of some bad eggs. I can't verify that they were actually rotten, but they were a couple months past the USE date, and we've had some go rotten rather quickly since the holidays. I set out the carton with about 6 eggs remaining, and told Farmer H, "Those eggs can be thrown off the porch."

If The Pony was here, he would have been all over the egg-throwing task. He likes to hit trees from the back porch deck, and watch the eggs run down. Farmer H is a horse of a different color.

"First of all, I told you because I expect YOU to take care of it. Not me. They're sitting right there by your bananas. You come in and out that door all the time. Just pick them up, step back out, and toss them."

"I'll put it on the dogs' food in the morning when I feed them."

"The dogs can run out in the back yard and lick them up if you throw them, too."

Sometimes, Farmer H just wants to feel like he's in control, I guess. This was a loseable battle, so I didn't insist.

While Farmer H has been gone to Sweden for work, I have been feeding the animals. It starts in the morning with Jack and Juno's pan of dogfood on the back porch by the laundry room door. They each have a pan, and there's a third one from when we had Grizzly, Poor Dumb Ann, and Juno. The pans have to be separated, because Juno will growl and Jack won't eat. So his pan is waaaay down the porch, past the french doors to our bedroom.

Here is what I found on Sunday morning when I went out to feed them. I moved it up on the porch rail, and left it there. 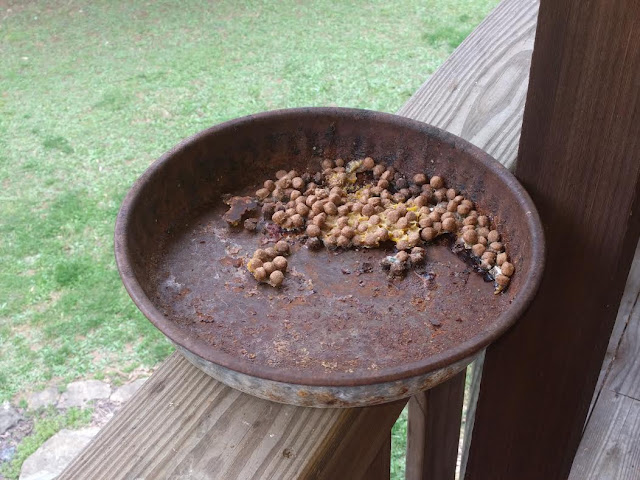 Looks like Jack prefers his eggs separate from his dogfood. His pan was pretty much untouched. Since I have moved it, the cemented kibble has been reduced almost by half, by the assorted feathered friends who feast here, and leave their white-and-black calling cards on the rail. I hope nobody lost a beak. I think trying to eat this cemented conglomerate would involve force akin to crashing into a sliding glass door.

I tried to dump out that pan the first day. Banged it on the porch rail. That stuff wasn't comin' out! I got the spare pan and moved it down to Jack's area. When he heard the food spill in, that rat-tat-tat on metal, he came running. And started devouring his kibble with gusto.

Now I know why people say that their car's paint job was ruined by kids who threw eggs at Halloween.

Posted by Hillbilly Mom at 4:28 PM

HM--So you were EGGzactly right about the best way to get rid of the eggs, but Farmer H did EGGzactly what he felt like doing.

No wonder the dogs steal your eggs from the hen house! I put my old eggs in the compost bin, makes good soil and if we ever have chickens, the dogs won't have a taste for eggs.

Sioux,
I see what you did there! I suppose the dogs are just plumb full of eggs, and it's not the delicacy Farmer H thinks it is to crack eggs over their dry food.

***
Kathy,
Which came first, the theft or the treat? The dogs were eating eggs way back when we first got the chickens, and had old Grizzly and Poor Dumb Ann. Juno learned from the masters. We were just glad they stopped not-eating the chickens AFTER KILLING THEM! That took a borrowed, heavyweight Mr. Shocky.

The Pony pointed out that we probably shouldn't be feeding the dogs chicken bones (just the not-splintery ones!) because it gives them a taste for chicken.