I made a new lunch for myself the other day. A sandwich of BBQ pulled pork on a ciabatta roll. It was pretty quick, because I had a tub of storebought pulled pork. Pretty much all I had to do was spread the roll with mayo (I love mayo!), then dice an onion that I folded into my portion of pulled pork, and slice a pickle. Yes. I know you understand how to make a sandwich. But I needed filler. 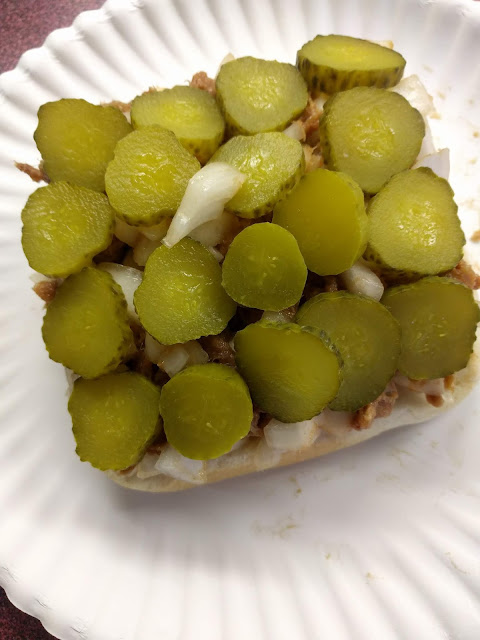 It was eaten before Farmer H came home for supper. But I showed him a picture. Can you believe that guy? He said,

I love pickle! It worked out just right. I used every slice of my mini dill. This picture is not very flattering. There IS actually meat on the sandwich. Here's a side view: 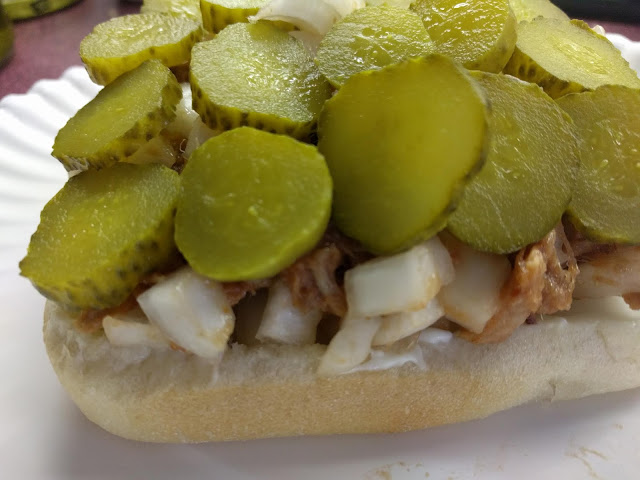 It squooshed down when I put the top on. I must say, it was delicious.

A few days later, I was making another such sandwich for lunch, and asked Farmer H if he wanted one. "Well, if you're making one for yourself, I guess I'd eat one." Don't get me started! I don't know why he can't just say, "Yes, thanks, I'd like one."

Of course I gave him about 1/4 the onion and pickle that I had on mine. He still had the nerve to say it was too much onion. I guess he can make his own sandwich next time!

Speaking of making sandwiches, I was planning to make a tuna version of this on Wednesday. I had the roll laid out, and the pickles, and was debating the onion as I put the can opener to the tuna can. Which had a date stamped on the lid that said

Um. No. I'm sure canned food keeps a long time. After the Apopadopalyspe, as Farmer H calls it, people will be stabbing each other with pointy sticks to get their hands on a 4.5 years expired can of tuna. But right now, I choose to toss that out and make another BBQ pulled pork sandwich.
Posted by Hillbilly Mom at 1:04 PM

I would have opened it to see if it was really bad. I am curious about so many things. Then I would have tossed it.

2015?? I'd be tossing that out too, then going back to the pantry and hauling every other can of anything in there to check the dates. The pickles are a bit too much for me also. I like them, but slice them paper thin, then chop them up and stir them into the tuna along with mayo and sometimes onion, sometimes not.
I "borrowed" Farmer H for my 'investment Dad' in my story. Hope you don't mind.

Kathy,
I actually had the lid almost off when I read the date! I looked at it. Couldn't see anything amiss. It might have been a little pale, but it WAS supposed to be chunk white tuna. It smelled really tuna-y. I poured the liquid down the drain, and hermetically sealed the rest in a ziploc bag. I didn't want to poison the dogs. Farmer H has a thing about tuna and sardines. Won't eat them, won't smell them without complaining. Yet I clean his poop off the toilet. Go figure! Such a sensitive snowflake is he.

***
River,
I thought it was a can from the past month or two. It was stacked with them, and I'd used the cans on top. Guess one got past me!

When I make tuna salad, I chop up the pickle and onion, and a boiled egg if I have one readily available. Not paper thin, though. I like the crunch.

I don't mind at all. My Farmer H is your Farmer H! I'm a giver like that.

Sioux,
That is un-American! Baseball, hot dogs, apple pie, and pickles. No wonder the Hillmomba police force still has a stop-and-hold order on you since your Gas Station Chicken Store shenanigans...