Marley, Denizen Of The Underbrush

This dog! Now that Marley is out of his pen, there are new reasons to worry about him. As I was coming down the hill to the mailboxes Friday, returning from my post office/gas/bank errands, I saw something trotting down the opposite hill, past our low water bridge.

It was Marley! Coming from the direction of the auto body shop about two miles from the Mansion. That crazy mutt. Of course he ran right over to T-Hoe. By the time I'd parked illegally on the side of the road, and opened the door to get out, he was under my feet.

"Marley! You shouldn't be out here! You'd better get home, boy! GIT! Get out of the way!"

I took out my phone, thinking I might get a picture of Farmer H's bus-waiting shed (for another time and place). As I turned to shut T-Hoe's door, holding the phone up so Marley wouldn't grab it, that stupid dog jumped up and SMACKED HIS HEAD ON IT!

"Marley! You idiot! Settle down!"

Marley showed no loss of enthusiasm. Here he is, hunkered down, waiting for a pat. 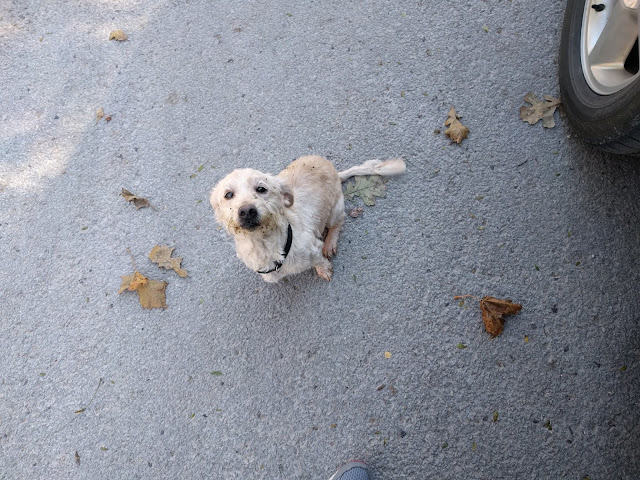 Not a flattering angle for Marley. That's not dirt on him. It's his apricot color that is unevenly distributed. A closer look would reveal the multitude of burrs clinging to his head and body. Juno gets them, but they generally fall off from her rolling around. This picture was after I'd put the mail in T-Hoe. Maybe Marley had worked off a little energy, after his two-mile excursion, and all that jumping.

I was leery of getting this pic, in case a car came along, and stupid Marley dashed out in front of it. Farmer H said that Marley was jumping around while he was unloading SilverRedo, and hit his head on the rear bumper. He really is an idiot. Marley, not Farmer H. I think he needs a little doggy helmet to protect his skull.

Marley ran all the way home alongside T-Hoe. Much to Juno's dismay. With the other dogs gone, she thought she had me all to herself. Until I let Marley out of the people-door of the garage. Of course he'd arrived back home just in time to dash under the garage door as it was coming down, making it raise again, due to the safety sensors. Juno was so disgusted, she slunk back to her house, no kibble.

I made it up the steps with my purse and mini bubba cup and 44 oz Diet Coke, with Marley jumping at me and rebounding off the whole way. As I was setting my stuff on the kitchen counter, Marley dashed into the kitchen. It was like a performance. Marley in, Marley out.

It seems that Marley KNOWS the rules. He just can't FOLLOW the rules.
Posted by Hillbilly Mom at 1:02 PM

Sioux,
I think, Madam, that perhaps you overestimate Farmer H's level of UNDERSTANDING. I think he needs those picture puzzle sentences to grasp the meaning. He's tied with Marley on FOLLOWING the rules.

Saturday, I specifically told him he could have chicken livers for supper, or the Country Mart deli fried chicken LEGS and WINGS. Or both. He was left upstairs on his own for feeding before the auction. I ascended from my lair to discover that Farmer H had eaten some chicken livers, two legs, and MY CHICKEN THIGH! Which was going to be Sunday night's supper. I'd planned on two nights for me out of that chicken, since Farmer H would be having his requested HOT DOGS and sauerkraut on Sunday. Don't even get me started on my missing piece of mini cheesecake...

I think Marley is just a bit over excited about being free and getting to know all of you better. He will settle down in time and at least learn to stay out of the kitchen and garage.

River,
I DID see Marley in the front yard yesterday, SITTING. And again this morning, laying down. So there's a few minutes that he wasn't running around like a cartoon Tasmanian Devil.