A Tale Of The Macabre From The Mansion

No rainbows and unicorns here. Look away if you're easily upset. This is your warning. Turn back now. Skedaddle. Go grab some home-churned buttermilk and pet a pretty puppy. If you believe in foreshadowing, here's a line from "Atlantic City." The Levon Helm version, by The Band. I'm partial to Levon Helm. Ever since he was THE coal miner in Coal Miner's Daughter. So here's the lyric:

"Everything dies. Baby, that's a fact. But maybe everything that dies someday comes back."

You'll come back and analyze this later. I'm sure. If you have the guts to continue. Are your doors locked? Are the lights ablaze? Grab a flashlight. Don't want to take a chance on the power going off. Might as well grab some Puffs With Lotion, too. In case you're tender-hearted or sentimental. Play that Levon Helm song on a loop as you read.

As you know, the Hillbilly family has goats. We have, at times, had as many as 17, I think. Then Farmer H tired of the novelty of the kids, and started selling or fixing his bucks. We were down to six goats when Farmer H traded two of them for the mini pony. And that guy bought two more. So that left us with only two. Our very first caprine, Goatrude. And the lovely Nellie, she of the long flowing hair, an angora, that Farmer H bought from one of his friends who couldn't keep her anymore. "Treat her right. She's my wife's pet." And we did. Nellie even gave us a set of darling triplets. Who knew such an old goat had it in her? She was a gentle soul, with beautiful blue eyes, even though they had that weird rectangular pupil that goats are famous for. Nellie was not the Einstein of the goat world. She was always getting her head stuck in the fence, her horns at that peculiar angle that prevented her from getting it back out. So Farmer H taped a spoiler to her head. 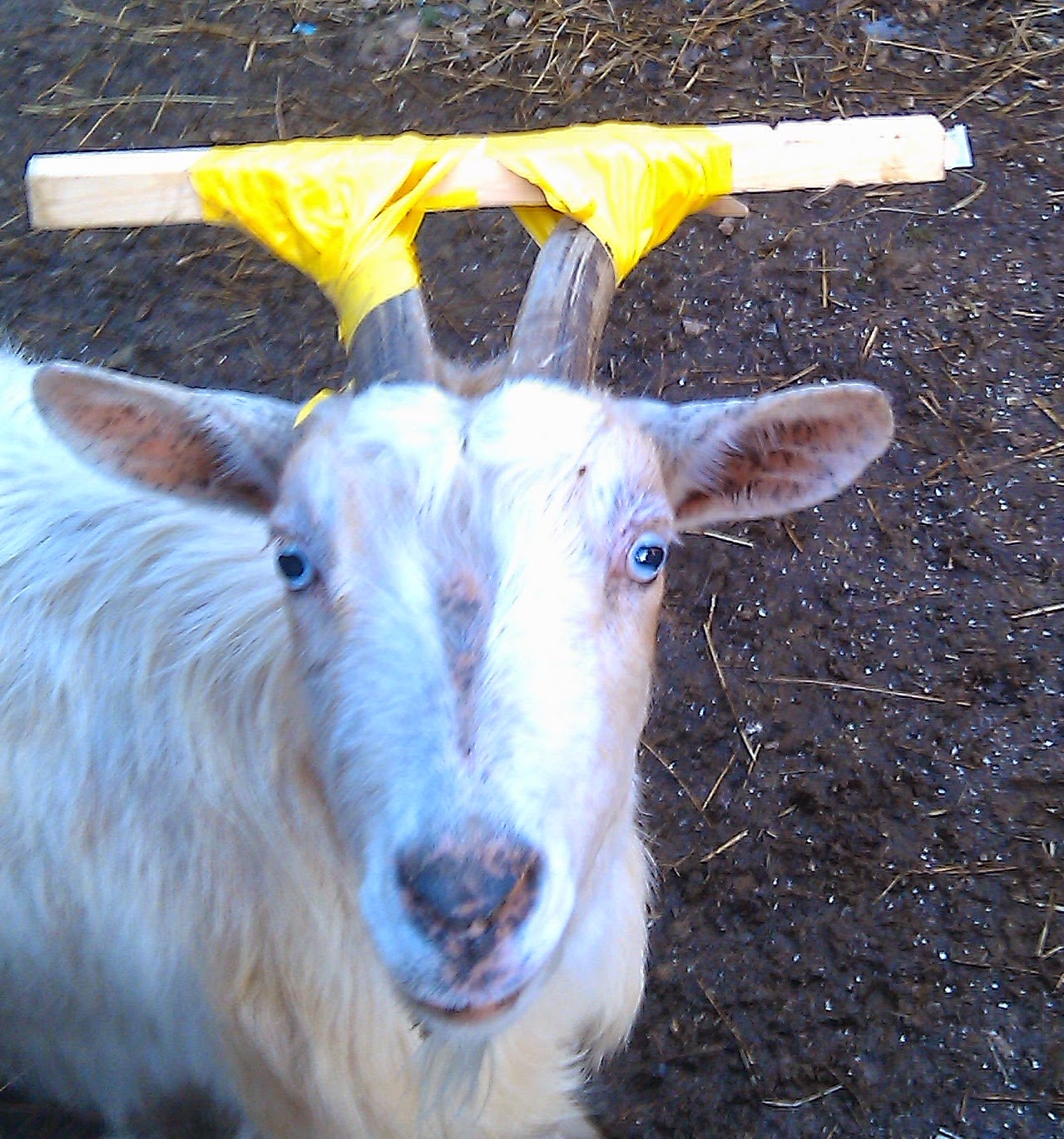 We have had animals die before. Dogs. Cats. Bunnies. Chicks. A plethora of chickens. Turkeys that Farmer H fed to death, or the one that was...erm...LOVED to death by her intended mate. And we lost Longhorn, the oldest goat, to old age. Depending on their size and closeness to the family, some pets are buried, and others are honored with a funeral pyre.

Tuesday evening, Farmer H went out to feed before supper. He came back shortly. "Nellie is down and can't get up. I noticed she has been slower and slower to come running when I dump out the food. Now she's just laying there, kicking her legs. I've got to put her down." Don't go thinking this is cruel. Everything dies, that's a fact. No need for it to be a slow, lingering death. Anybody who eats has a hand in dispatching other living organisms. Not that we planned to eat Nellie. But seriously, unless you can perform photosynthesis, you kill to eat. Even carrots let out a death cry.

Farmer H went thumping down the basement steps to the safe. He got out his 9mm that he keeps for such emergencies. I did not hear him mention it to The Pony. I was hoping The Pony was oblivious. Because, even though he doesn't really care about helping people, The Pony has a soft spot where those animals are concerned. I set about chopping onions for our tacos for supper. I heard a shot down in the woods. Then another. Those darn onions really made my eyes tear up.

Farmer H came in the front door and thumped back down to the basement. I heard the workshop door. Then he came back upstairs. "The Veteran is coming out to help me. I've already got a fire started. I don't want anything left. I'll be a while."

I got supper ready for the boys. The Pony won't eat tacos, so he had some chicken tenders. #1 and I each took a 10-inch tortilla and built ourselves rather impressive giant burritos. Who needs tacos?

The front door opened. It was Farmer H. "She's STILL not dead! I've got to get my gun again. She's still kicking her legs."

"I don't want to know! That's just cruel. She was that lady's pet! You promised to take good care of her." How hard is it to get that right?"

"I don't know. I'm trying." Back down to the safe for the 9mm. I heard two more shots. Farmer H was gone a couple of hours. The next morning, he said, "There shouldn't be nothing but bones left now. We had a really hot fire. It was still burning when I came to the house." He went off to work. I slept in.

Around 9:00, I called my mom to chat. "No, we're not coming in today. Unless you need something. It's cold. Wait. I think The Pony wanted to download something. We'll run by for about an hour, if it won't interfere with your therapy lady. Okay. Around 11:00, maybe. Just a minute. HEY! PONY! Come up here. Ann's in the front yard, and I'm afraid she's eating a chicken! She's got something black in her mouth. Come check."

The Pony galloped up the stairs and flung open the front door. "What IS that? I think she has a squirrel. No. A rabbit. It's still alive. I see feet kicking. No. Wait a minute. It's a piece of something, with scraps hanging off, and she's shaking it. I think she has a piece of charred goat."

I pointedly ignored the front yard area as we went up the driveway. I had put the incident out of my mind by the time we left Mom's. When we returned home, I let The Pony out at the end of the driveway to pull the big green trash dumpster down the driveway ahead of T-Hoe. He parked it by the porch and came through the people door of the garage after I parked.

"Hey, that neighbor horse was giving you the eye. Like, 'What kind of creature would pull a wheeled conveyance behind him like a common beast of burden?'"

"Don't look on the front porch."

"There's a skull. My first thought was to send a text to Dad with a picture of it, saying, 'Nellie says Hi.'"

"NOOO! That is SO wrong! What's the matter with you? Don't you dare!"

"No. Not even your dad deserves that."

Yep. Sometimes, Mrs. Hillbilly Mom's life is like a Seinfeld episode. Other times, it's like a Stephen King novel.

Posted by Hillbilly Mom at 8:17 PM

Ewww. You warned me, but I insisted on reading--tumbling headlong--'til the end.

Even though they have those creepy eyes, goats still deserve to have a quick end. It sounds like Farmer H can't even get REDRUM right...

So sad to lose a pet, even if it isn't one that you cuddle in your arms. But I have to confess that I laughed at the Pony's idea to text that picture with the comment. A sense of humor is a good thing.

Sioux,
Yes. I warned you. Don't go crossing your eyes, they might stay that way! Don't pop your knuckles, they'll be HUGE and you'll get arthritis. Wait 30 minutes after eating until you go swimming. No bare feet until after Memorial Day. Straighten up!

Farmer H was beside himself. He always said he could never put down one of our dogs. That he'd get his buddy to do it. Thankfully, we have not crossed that bridge yet, with our doggies having the gumption to die on their own while we were at work or sleeping.

******
Kathy,
Okay. It was funny in a totally inappropriate kind of way. I can't imagine who he gets that from...

Today, when I greeted Juno on the side porch after we returned from town, The Pony said, "Can you smell Nellie on her breath?" I refuse to believe that my sweet, sweet Juno had anything to do with Ann's shenanigans.