Juno has been loathe to enter her dog house since Farmer H moved it six feet across the porch to power-wash the deck. Since blog buddy River commented that perhaps Juno could be lured into her former abode with a snack, I decided to try an experiment.

When Juno greeted me at the side porch as I returned from town Friday, I knew she'd be expecting a treat. She knows that word for sure. All I have to do is say, "Do you want a treat from the house?" and she jumps and yips like a pup, smiling with her almost-human eyes and her fangs as well. 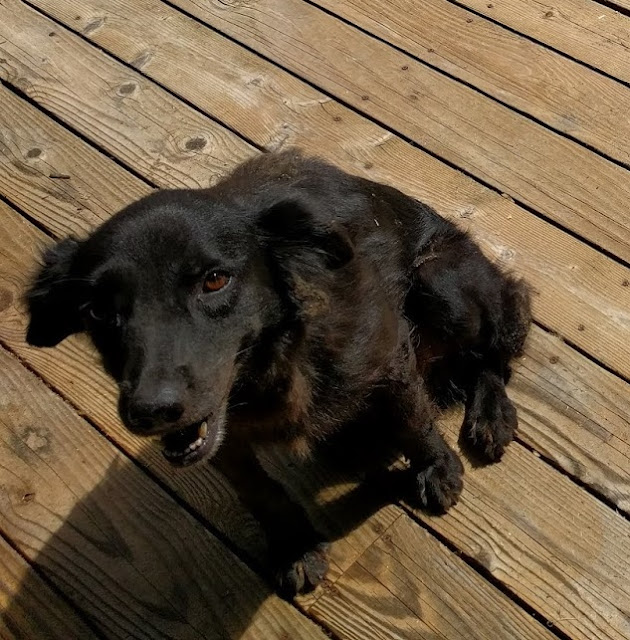 We'll forgive her unkempt appearance. She loves to run through the burrs and brush, and it's her molting time of year.

Anyhoo... I had some stale hamburger buns that I'd dipped into the juices at the bottom of a roasting pan where I'd cooked potatoes/carrots/onions and BACON! Also some chicken wing bones. I tossed a bun into Juno's dog house.

Juno looked at me like, "You trippin'?" Or maybe it was more like, "What in the Not-Heaven, Gal!" She couldn't believe I'd dared to throw good food into that shunned house. She nervously stuck her head in, ready to bolt at the slightest hint of danger.

Then Juno CLIMBED INSIDE!

She immediately laid down, her tail barely inside. Like the house was going to start swirling up in a tornado with that hateful Almira Gulch trying to get her. I heard Juno EATING the grease bun. This was quite unusual, as she normally grabs her treat, goes to the back of the house, and turns around so she can look out while eating.

Juno finished the bun and turned around, poking her head all the way out the door, like she was leaving. I thrust a chicken wing bone at her snout. She took it. Backed up. Ate it. Then hopped out of the house. I handed her another chicken wing bone. Juno walked across the porch and ate it by the wall. So much for becoming acclimated to her "new" house six feet away from where it had been her "old" house. She had gone in for a treat, but didn't seem to be any more accepting of the house in the new location.

I think it was a valid experiment. No other dogs were present to make her run in to protect her treat. I could hear my Jack baying down in the woods. He missed his treat.

The other dogs stay away from Juno's house, too. As they always have. I imagine at one time they might have stuck a head in, only to find Juno inside, snarling at them. She's big and bad from inside her house.

Heh, heh! Farmer H said that when he went to move it for power-washing the porch, he had a surprise.

"Did you throw out her bones and antlers?"

"No. I shook out the cedar shavings, but I left her stuff in there. She always finds them and brings them back anyway. But when I picked up the front of the house to move it, JUNO WAS INSIDE! She came running out!"

"Yeah. She's in there all the time. She's hard to see in the dark. She lays in the back."

I'm pretty sure she'll return to her house like normal when Farmer H moves it back. Don't you worry about Sweet, Sweet Juno. There are two store-bought houses down on the end of the porch that faces the BARn. Juno sleeps in one of them a couple nights a week.
Posted by Hillbilly Mom at 1:08 PM

I suggest keep on putting the treats inside her house for a while longer instead of just giving them to her, then she'll associate the treat with being in her house and eventually return to former habits where you give a treat and she takes it in there. Of course once the house is moved back again, you may have to repeat the entire process. Or just leave the house in it's new current spot?

River,
I couldn't do that today, because the treat was drippy-wet stale buns. I'd left them sitting in the bottom of the pan overnight, after I'd scooped out the potatoes/carrots/onions to put in plastic containers. I'd already put the bacon away the night before. Can't have that grease in my Sweet, Sweet Juno's house.

That darn dog! I called her and Jack around to their metal food pans on the back porch. I put two bun halves in Jack's pan (he's a little dog), and four in Juno's pan. Copper Jack was going to have to do without this messy treat. However, Juno wouldn't come up and eat next to Jack. He even tried to accommodate her by dragging his buns out of the pan and onto the porch boards.

The pans are at least 3 feet apart. It shouldn't be an issue, but Juno is such a diva! I scolded her for not coming to eat, and of course she trotted back around the porch, past the squirrel perch area, only to be confronted by Copper Jack blocking her way to her house that she won't go in. So then she started back toward the food pans, where Jack was happily eating HER buns, too!

I imagine she growled at him and at least got her chicken wing bones. That's what I tossed Copper Jack. One bone. He's a guest, you know. Not a resident.

All of my dogs eat out of the same dish and share the water dish with the cat. I am the real alpha in this house, although Toni Louise thinks she is.

Kathy,
That has never happened here, no matter which combination of dogs. Farmer H had to put Tank the Beagle's pan around the corner from Poor Dumb Ann the black german shepherd, and Grizzly the lab/beagle.