Remember that baked tomato egg thingy that Farmer H saw on his friend's Facebook? The one he made sure to tell me about and show me a picture of, saying he thought it would be good? I made it for him Thursday.

I'm sure other people might be able to do it in a bit less time. But I'm not going to fry bacon. I hate to fry bacon. I bake my bacon. I can't just bake plain bacon, so I drape it over potatoes/carrots/onions, to give them flavor. Then we have vegetables too, and not just bacon. Of course Farmer H said that he likes HIS bacon crispy. Too bad, so sad.

My point is, if I'm putting bacon (cut up, mind you) in the bottom of his tomato cups, it's not going to stay crispy anyway. It's going to be covered by an egg and cheese. So I put my foot down, by cracky, and told him that I was NOT frying the bacon.

Anyhoo... I thought I had all the supplies, but I only had two onions. That is not enough for my liking. So I couldn't bake the bacon until after I'd been to town for my 44 oz Diet Coke onions. Of course it took a little prep time to peel and cut the onions and potatoes. I seasoned the baby carrots and put them in to bake while I got the onions ready. Added them to bake while I got the potatoes ready. Then draped the bacon on top and put the roaster pan back in the oven for another 30 minutes. That whole bacon baking prep took 90 minutes, if you don't count the time I took to go buy the onions.

I had a later than usual lunch around 3:00. But at 5:30, I was right back upstairs to make Farmer H's tomato egg. I'll tell you how, just in case you have half a day to squander sometime. It's not that hard. It's just time-consuming. Unless maybe you fry your bacon.

Here's what I kind of did, but you can google your own "baked tomato egg"
Yeah. I didn't follow all those exact steps. I put my tomatoes (I made him two) in those foil muffin cups. They stretched them way wide, but didn't stick to the pan. I actually used a foil mini loaf pan to set them down in. Only a little cheese spilled over onto the pan.

They took longer to cook that this. You can tell, though, by just looking at them to see if the egg has turned white, and if the yolk is solid. Farmer H says he only likes runny yolks when he has toast to sop it up. As you might imagine, I was NOT going to the trouble to make him toast. He told me that after the fact, and I was NOT driving to town for sliced bread!

Anyhoo... while the oven was preheating and I was gouging out tomato guts with a spoon, I put four slices of bacon into the oven on a pizza pan covered with foil. It crisped up nicely, to become soggy on the bottom of the tomato! I put a cut-up slice in each tomato, and Farmer H still had two crisp slices of bacon to eat on the side.

They looked very filling. Farmer H said they were good. I didn't think of getting a picture until he was almost done! But I made him push his plate away, and got a pic to prove the baked tomato eggs happened. 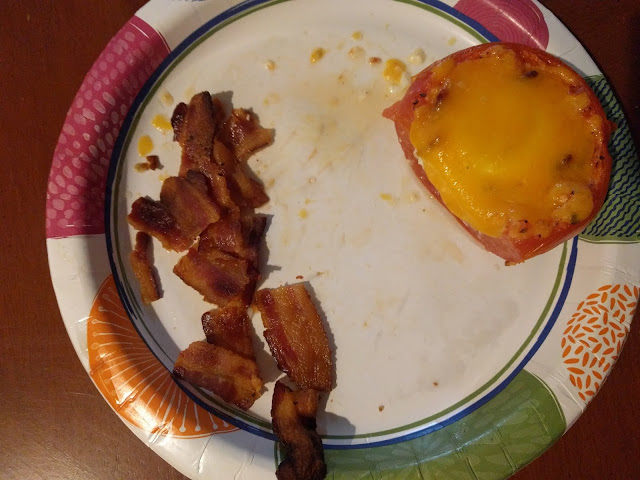 A view from above. You can't tell much. The melted cheese is about it. 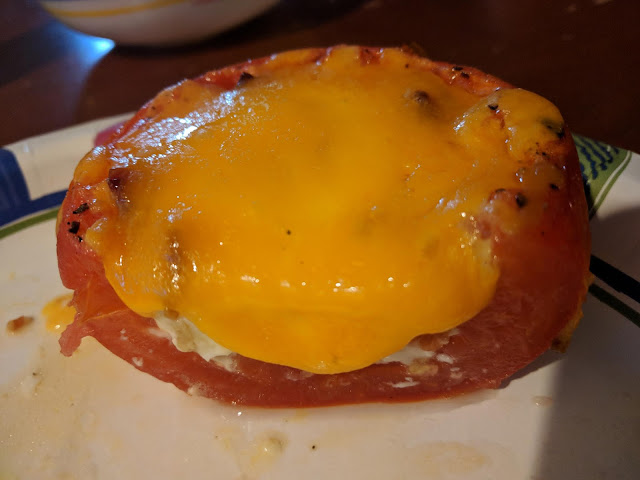 Again, the melted cheese hides the egg. But it's in there! I swear. I have one tomato left. And some bacon. So it won't be hard to make this again tonight for Farmer H. I'll be having tuna salad.
Posted by Hillbilly Mom at 1:00 PM

It looks nice, but I know I can't eat eggs and tomatoes together. Don't know why, just can't. I've never baked bacon and I really hate the mess it makes on the stovetop when I fry it, with its spitting and popping in all directions. I used to grill it instead, but cleaning out the griller section of the oven is a PITA, so I haven't had bacon in a long while. When my kids were little they used to say gorilla instead of griller, just to be funny and once I asked them to remind me to clean the griller so they drew a picture of a gorilla in a bubble bath scrubbing his back with one of those long handled thingies and write under it, "clean the gorilla" and stuck it on the fridge.

River,
Yeah, the mess! The roaster pan works great. The bacon flavors the veggies, and the lid stops the spatter. Crisping it in the oven later doesn't have any spatter. The remaining grease just leaks out on the foil on the pan. Of course, it means having veggies every time we have bacon...

The thought of the gorilla in the bubble bath makes me smile. I don't do that much!

I just might give this recipe a try. I use a big iron skillet and fry my bacon slow. My dogs gather at my feet there by the stove to lick any grease pops from the floor.