It's no secret that Farmer H likes his vegetable beef soup piled high over the edges of the bowl. In fact, he doesn't need a bowl at all for his soup, since he doesn't like the juicy part. Which is what I actually think soup IS, but we're using Farmer H's logic.

I AM TURNING INTO FARMER H!

Not the bathroom habits, thank the Gummi Mary. And I don't have a PopArm. But I DID find myself using a fork to dip out a certain delicacy the other day, leaving the juice behind. 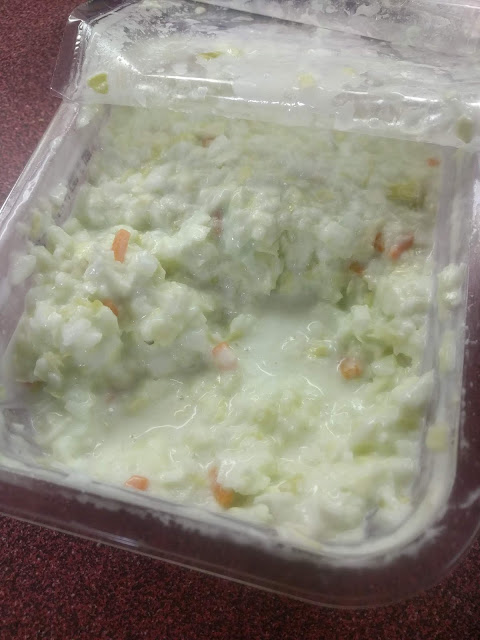 This is SO. VERY. WRONG. Slaw is not a soup! Yet when I opened up my favorite side dish, I was stunned to find my cabbage and carrots swimming in liquid! Mrs. HM has been betrayed by The Devil! That's where I get the best slaw. Except maybe for Captain D's, and it's too far away, and just a little foam individual cup. Even The Devil's Playground was out of the big containers of slaw. Good thing, I guess. I'd have been paying for LIQUID instead of slaw. I don't mind a little juice in the bottom, but the container shouldn't be half-full.

I know this slaw is pre-packaged and shipped to The Devil's Playground. Otherwise, I'd be pointing the finger (the BAD finger, as Genius and The Pony used to call it) at the deli staff. I was there last Thursday, after an ice storm, right before a snow storm, and only about four registers were open. The checkers were badmouthing the deli, which was closed, because ALL THE MEN had called out.

I'm pretty sure it was a man behind my soupy slaw, too.
Posted by Hillbilly Mom at 1:07 PM

I am not a slaw expert, but you are right! It should not be soupy.

Our pre-packaged coleslaw also has too much dressing in my opinion, but not nearly as much as that! You'll have to tip it into a strainer and let it drip out before you eat it. It actually doesn't even look like coleslaw to me, it's so white, I thought it was cauliflower soup. When I make coleslaw (because the bought stuff is rubbish), it is colourful and the shredded vegetables are easily seen through the minimal amount of dressing I add.

Kathy,
I'm pretty sure The Devil's Playground sells it based on weight. The liquid weighs more than the particles. So in effect, The Devil is like a butcher with his thumb on the scale...

***
River,
Yes, I am going to pour out the liquid. Captain D's slaw has very little dressing. It's crunchy and delicious, but I don't drive 30 miles to that seafood restaurant every week!

When I buy the bagged slaw mix, I like adding BBQ sauce to it, as a side dish with baked chicken breasts. I know I've mentioned this before, much to your horror!