A Vist With My Best Old Ex-Teaching Buddy Mabel

Wednesday, Farmer H and I loaded up A-Cad to drive a half hour to meet for lunch with my best old ex-teaching buddy Mabel and her husband. The Truth in Blogging Law requires me to inform you that Farmer H actually loaded A-Cad. With Chex Mix and Mabel's birthday + Christmas gifts, and a multitude of fancy auction frames and a heavy mirror.

For lunch, Farmer H and Mabel and Mabel's Hub all ordered from the breakfast menu. Mabel had a biscuit and gravy with a cheese omelet with extra cheese. Mabel's Hub had eggs over easy and pancakes, and Farmer H also had eggs over easy, with gravy. Well. I can't imagine why anyone would want to order breakfast at 11:00 a.m.! I had my usual meal from this restaurant: Chicken Quesadilla. 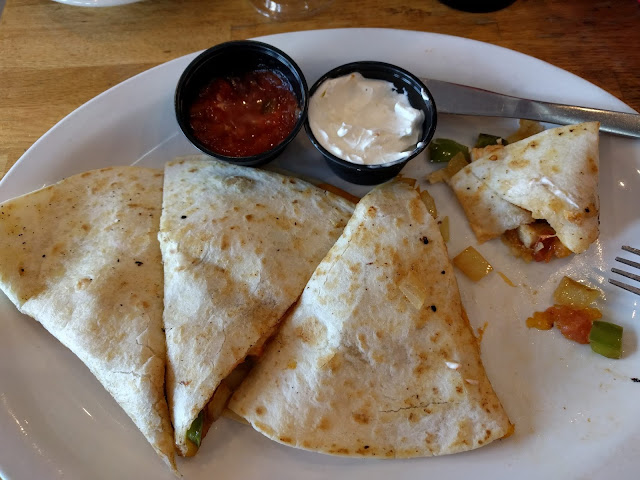 It was, as usual, DELICIOUS! I meant to get a picture when the plate arrived, but in my feeding frenzy, I barely caught myself in time to get a picture before it was all devoured. Mmm...just the right amount of crispness to the tortilla, chunks of chicken, cheese, red/green peppers, and onions. My only complaint (and you KNEW there'd be a complaint) was that I felt shorted on the salsa. It's like how Farmer H would have filled a paper cup of ketchup for me. I could eat all that salsa on one section of that quesadilla! Still, I rationed it, and came out even at the end, although I had some sour cream left.

After breakfast-lunch, we convened down the road a piece at Mabel's marvelous house, to catch up on recent happenings and relive old times. Farmer H had a captive audience in Mabel's Hub. They hit it off swimmingly when they first met several years ago, and there's never a lull in their conversation.

Farmer H sold Mabel most of his frames, threw in a couple of other gewgaws, and left her with more bargain treasures to decorate her marvelous house. Did I mention that Mabel's house is marvelous?

Mabel sampled the Chex Mix, just to be sure it was acceptable, you know, so she could turn it away if it wasn't up to standards. Heh, heh! Like THAT would ever happen! 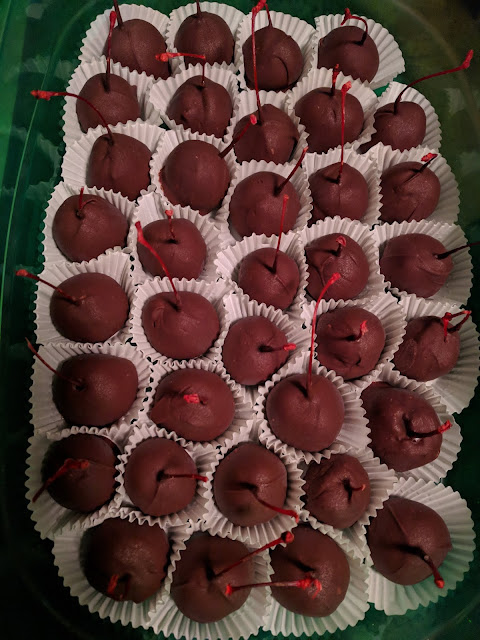 I scored some delectable homemade chocolate-covered cherries that I must ration to the tune of 1 per day. They are very sweet, and not a wise choice. But I plan to have one with supper every night. 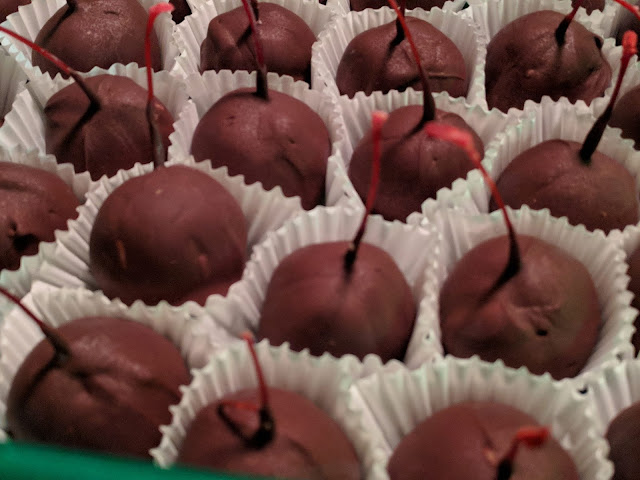 A good (and delicious) time was had by all, and we plan to do it again in February.
Posted by Hillbilly Mom at 2:42 PM

"eggs over easy with gravy" Eggs with gravy?
GRAVY
ON EGGS
The same sort of gravy that goes with sausages and mashed potatoes?
I'm currently reading a novel in which several people have had gravy, brown gravy and red gravy.
can you explain the differences ? Here all gravy is brown, although it can come with different flavours, such as onion gravy with real onion in it, peppercorn gravy with real peppercorns and so on. anything else is called sauce and maybe this is what is meant?
Anyway, back on track, do you really think you can ration those choc-coated cherries to one a day?

River,
I was horrified to see that white gravy spread over the top of Farmer H's fried eggs! And I don't even like fried eggs. It just seemed so very wrong. Like when my grandpa used to put salsa on his scrambled eggs on Christmas morning. Even Mabel's Hub said, "Wow. They really meant it with that gravy."

The white gravy is flour and maybe milk (? I don't make gravy!) mixed in with the sausage drippings, usually with pieces of sausage in the gravy, and black pepper. It's delicious on biscuits. There's also white gravy without the sausage, poured over chicken-fried steak, which is quite popular in Oklahoma.

Brown gravy around here is usually from beef stock, I think. Used on mashed potatoes (though some like white gravy on them) and turkey and open-face sandwiches and roast beef.

Red gravy I'm not so sure about. It makes me think of ham. I've heard of red-eye gravy, which might have coffee in it?

I CAN ration my chocolate cherries! I've done it for three days now! I even told Farmer H he can have one a day, too, which will hasten his death and my access to his money! I'd like to hope that such an invitation made him realize that sugar is his enemy...but I figure he'll probably sneak a couple of cherries each night.

fishducky,
As they say on Seinfeld: They're real, and they're spectacular!

Yuk. Gravy on eggs! I am not a big condiment eater. I like to taste each element of my food. I am not a picky eater and my foods can touch each other on the plate, but let's face it; some foods are not meant to be hidden under gravy! You are right about the red gravy and the red eye gravy is just red gravy made with coffee instead of water. Red gravy is very thin (or very wet, as in regards to water …. as our dictator would say). Sorry, just watched the news and am a little more annoyed than usual.

Kathy,
I have never eaten nor made red gravy, so that info was pulled from the depths of my food-loving valedictorian brain.

I don't like gravy on anything besides a biscuit, or a chicken-fried steak. Not even on my mashed potatoes. The boys will dip fries in it, or chicken fingers from Dairy Queen. Farmer H is a Gravyton like The Pony is a Butterton.