Barreling Down The Interstate With Farmer H

Don't worry! This isn't a horror story. Mrs. HM is safe and sound. In fact, the tale comes from our Thanksgiving trip to visit The Pony in Oklahoma. So I've had time to decompress (heh, heh, at first I started typing decompose) from my sweaving adventures with Farmer H. It was actually one of his least scary trips. Not that such a claim is saying much...

Anyhoo...when Mrs. HM goes on a road trip, you can bet there will be many pit stops. Every couple of hours, I have to get out. Not from the stress of riding with Farmer H, but because my blood pressure medicine commands me to find a bathroom. Also, my knees kind of expect a leg-stretching, so as not to fuse in the sitting position permanently.

We have our standard stops. The Casey's in Steelville, Missouri, about 90 minutes from home if we have already fueled up before departure. Then a bonus stop 18 miles later, at the McDonald's in St. James, for a Sausage Egg McMuffin for breakfast. Even though Farmer H sometimes has a pre-breakfast of Casey's donuts.

We used to stop at an interstate Rest Area just south of Genius's college town. But it's been closed for a few years. Not exactly closed closed. You can still drive off the exit and park to rest. But the restrooms are gone! Does that make sense? They tore down the buildings, left the roads, and put up some Port-A-Potties for truckers.

That's okay, I can hold it until the official Rest Area, which is about 20 miles before we get to Springfield. It's nice, with toilets and a Visitor's Center (not that we need it, of course, since we're NATIVE MISSOURIANS), and food and drink machines.

I didn't get a picture of the whole building, because who takes pictures of Rest Areas along the interstate? I took these because of their display. 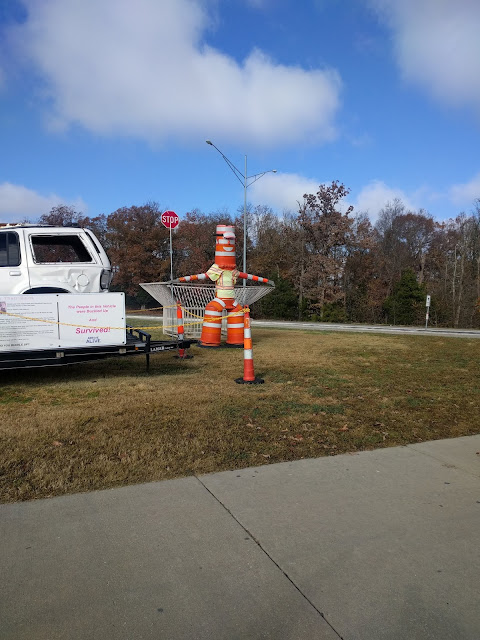 It was to promote safe driving over the holidays, I suppose. Or scare the bejeebers out of people so they wouldn't sweave. They put these up every year. I didn't capture the full scenario, but they have an almost-demolished automobile with a sign explaining that the passengers were wearing seat belts, and lived. Then facing it, they have a barely dented automobile, with a sign explaining the passengers were NOT wearing seat belts, and didn't survive the accident. I always wear a seat belt! They're preachin' to the choir! Anyhoo...I took the pictures for this guy. I thought it was a creative use of Missouri Department of Transportation (MODoT) equipment. Plus, I liked that really tall stop sign in the back.

We have three other pit stops before we reach The Pony. Another Rest Area that we seldom use, about 90 minutes from here, on the other side of Joplin. I think it's actually run by the state of Oklahoma. And then our Casey's in Adair, Oklahoma, where we eat a pizza slice lunch special. Then the McDonald's in Okema, less than an hour from Norman. Those places can't compare to this Barrel Man. He's my #1 attraction.

But the pizza slice is a pretty close second.
Posted by Hillbilly Mom at 1:47 PM

What a handsome dude!!

I love that orange barrel man! I want one.
I need to get up and do the knee and hip stretching thing too, these days. It used to be just the hips getting stiff, now the knees must be feeling left out because they're joining in.

fishducky,
I like the jaunty way the bill of his cap covers his eyes!

***
River,
I'm afraid that even if I could manages to "borrow" the orange barrel man from MODoT, the costs to ship him to you would be prohibitive.

Farmer H has trouble with his hips but not knees, and I'm the opposite. So far...

I need this! Do you think my customers would notice this if the stop sign was attached?

Kathy,
Sadly, I do not. I am afraid your customers would not notice if the big orange barrel man walked over to their car and beat them about the head and shoulders with that stop sign!