Mrs. HM Got Boned At The Sausagefest

The Pony is home! We have him for a couple weeks, anyway. We got home from CasinoPalooza 3 on Monday afternoon, and by Tuesday morning, I was taking him shopping. Oh, there's more to the story, which may be told here or there. But today, Mrs. HM is the star of the blog. As it should be!

By the time The Pony got up and ready, it was 11:30. I was in the middle of balancing my checkbook by automated phone. So we didn't leave the Mansion until after noon. The Pony had planned on a trip to The Devil's Playground for a birthday card for Farmer H, a gift, and some body wash and shampoo, which he forgot to pack. Sure, he could have gone alone. But I wanted to get his shoes before Christmas, and the schools let out for the break, and I was also going to The Devil's Playground. So we agreed that he'd ride along with me, like old times, and we'd go our separate ways with The Devil, so he wouldn't see what I was buying. I gave him the keys to go back out and wait in T-Hoe.

Of course I ran into my best ol' ex-teaching buddy Mabel just inside the doors. So I was delayed a bit before I started shopping, even though we were going to meet for lunch the very next day (today!). By the time I got back out to T-Hoe, it was after 1:30, and we still had to drive 30 minutes over to Bill-Paying town to the shoe store. It's not like I had anything else to do, but I'd eaten nothing, and The Pony was subsisting on two Casey's donuts that Farmer H brought him, even though they were not the kind favored by The Pony.

"Do you want to pick up some lunch? I don't really want to take time to sit down and eat, but I can get you something to eat while I drive."

You don't have to hit me over the head with a shovel. I can read the writing on the wall. The Pony had been telling me about an app in Norman, where you can get a Whopper for 1 cent, if the Burger King is within a mile of McDonald's, and you order through the app. And saying that he thought the McDonald's and Burger King in Bill-Paying Town AND Hillmomba were both within a mile of each other. So I figured maybe he wanted Burger King.

"Hm. How about Captain D's? I don't think we have one in Norman."

"Okay. Dad and I haven't been since the last time you were home. Last Christmas. Call him and see if he wants something. That can be his birthday dinner. Instead of me making rigatoni. It's going to be almost supper time when we get back."

"Dad says he wants a 3-piece fish, with slaw and fries."

"Okay. Let's go in to get it, because I can never hear on their drive-thru speaker, and I want to see the menu."

Let the record show that I selected the baked lemon pepper whitefish, with slaw and steamed broccoli. The Pony also had a 3-piece fish, with fries and extra hush puppies. AND an order of breadsticks. The Pony loves him some breadsticks!

We got everything situated in T-Hoe, so The Pony could chow down while I drove home. Or actually to The Gas Station Chicken Store for my magical elixir.

I carry three of them in T-Hoe, you know. For survival purposes. So I ripped one open, the short version, shorter than an ink pen, and took a bite.

"What in the NOT-HEAVEN? I think I just broke a tooth!" I dug the piece out of my mouth. "Nope. Not a tooth. Doesn't feel like any parts missing. Besides, my teeth are NOT that color!" 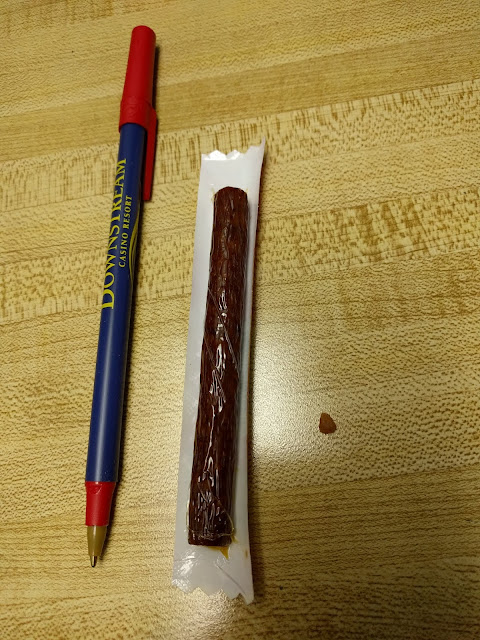 I assure you. My teeth are NOT that color. Can't emphasize that enough. Pretty sure that's not an arrowhead for the world's smallest arrow. It must be some kind of beef bone particle from making the Slim Jim. No harm, no foul. I felt it with my tongue before I bit down solidly.

Of course I told The Pony, "Hey! That's a blog post! I'm saving it!" And of course, milliseconds after I said that, I dropped it! Down to the floor of T-Hoe. I found it, though! I wasn't getting boned again, cheated out of a blog post! No siree, Bob!

I think I will chew my Slim Jim more gingerly now.
Posted by Hillbilly Mom at 3:01 PM

You'll probably get something good from Even Steven now!!

fishducky,
I think I deserve it!

Every time I bite into something and get something unexpected like a broken tooth, that item is usually off the menu for me forever, or until I've forgotten why I don't eat it anymore.

River,
I was like that with the canned white meat chicken for a while, after finding a BONE in it. I sent it to the company with a letter, and they sent me a bunch of coupons for CANNED WHITE MEAT CHICKEN! They might at least have offered a different item from their company. It was Sweet Sue. Known mostly to me for their canned Chicken and Dumplings.

Complaints here in Australia usually get us a gift voucher from the store we bought the offending product, with no specifics on what to buy.

River,
That seems like better customer service than giving you a coupon for the offending product!

Send the people who make Slim Jim's a scathing e-mail. Maybe they will send you a case of their product! I sent a letter to a grocery chain way back in the 70's. This is before e-mail and long distance calls were not free. We lived on Jekyll Island and it was a trip to get to Brunswick to buy groceries. Two cause-ways and a draw bridge, so I only went once a week. With HeWho, after he got off work. The twins were not quite 2 and I had a 4 year old and a 7 year old. I suppose I could have attempted a trip while the 7 year old was in school, but it still meant two shopping carts, or one cart and the stroller to manage while piling the necessities in the cart. The meat department refused to make more ground beef for me, as it was close to closing time. I was buying 10 lbs., or I had planned to because it was on sale and I had 4 hungry children to feed. I even offered to purchase 20 lbs., but that meat dept manager held his ground. So, imagine my surprise when a car pulled into my modest little drive and the regional manager and the local store manager came to my door with arms full!! I got steaks and 10 lbs. of ground beef! It pays to complain!

Kathy,
Now THAT is customer service! Or maybe they were just a little bit leery of someone who lived on JEKYLL Island!