Sometimes, A Breakfast Buffet Is The Wise Choice

On the last day of CasinoPalooza 3, a Monday morning, the Hillbilly family plus Friend convened at the hotel restaurant for the breakfast buffet. It's pretty reasonable for an all-you-can-eat buffet in a casino, at about $10. Little did we know that Farmer H was going to turn traitor and ORDER OFF THE MENU!

We knew The Pony might pull such a stunt for the second day in a row. He liked the chocolate chip pancakes, and got a stack of 3 the first morning, then ordered 2 this time, seeing as how they were HUGE. Farmer H, though decided on the Senior Breakfast. We've had it before, when we didn't want to consume mass quantities of breakfast food, saving room for a nice dinner.

Farmer H wanted 2 eggs over easy, which you could get cooked to order at the buffet, and a sausage patty (also available at the buffet), and a piece of white bread toast. He also ordered hot tea, and an orange juice. So he didn't really save any money with his $4.99 Senior Breakfast (not that money was an issue, we were on a GAMBLING trip, for cryin' out loud!), since the tea was $2.25, and the orange juice $2.95. I guess that was just Farmer H's way of making what he thought was a wise choice (not that I've ever known him to do such a thing) and not get bogged down with too much food so early in the day.

Genius, Friend, and I had the breakfast buffet. Here's my plate: 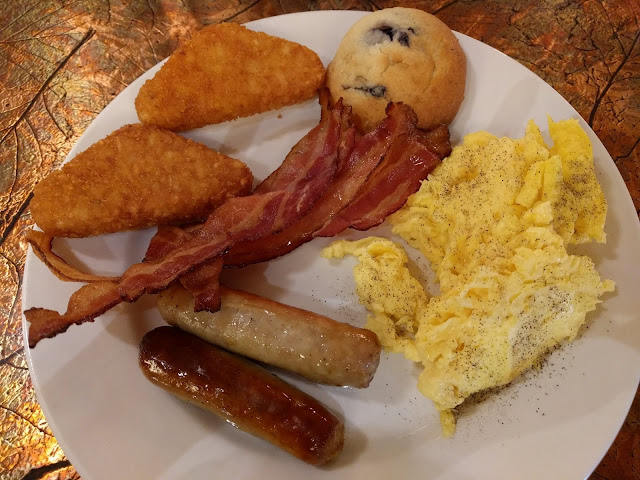 Yes, I could have limited myself to only one hash brown, and only one sausage link, and left off the muffin-top cookie. But it was CasinoPalooza 3, by cracky! Mrs. HM has to kick up her heels some time. Anyhoo...it could have been much worse. You don't know how much I envied Genius and Friend for their biscuits and gravy. It's Not-Heaven not to have the metabolism of a 24-year-old!

I show you my plate, not to laud myself on restraining my piggish tendencies (somewhat), but to point out that the breakfast buffet was actually the wisest choice that day!

Genius, Friend and I were completely finished, and Farmer H and The Pony did not have their food yet. In fact, the waitress came back and asked The Pony again how many pancakes he wanted! They hadn't even started cooking!

That waitress. We didn't have straws for our water and The Pony's Sprite until we asked when she checked on the pancake order. She also didn't bring Friend the requested hot sauce in a timely manner. Thank the Gummi Mary, a bottle was just sitting on an unused table, free for the taking. Genius said the coffee tasted burnt.

The waitress apologized for each infraction. "Bear with me! It's the first time they gave me a table. It's only my fourth day!"

After she was out of earshot, I added, "And it might be your last..."

Anyhoo...we waited for Farmer H and The Pony to finally get their food, and eat it. I'm pretty sure Farmer H gave her a decent tip on the credit card. It helps to be an attractive young lass when waiting on a table full of men plus Mrs. HM.

Posted by Hillbilly Mom at 2:16 PM

Your cookie has an unhappy face, probably because she/he has a bacon tail with no body in between. I can't eat scrambled eggs without some toast.

River,
Aww...my cookie DOES have a sad face. I could have given him shoulders and hips with the hash browns, and legs with the bacon, and feet with the link sausages! Or even a frilly skirt with the eggs! Playing with my food would have allowed Farmer H and The Pony to receive their plates, so we could eat together.

I would have preferred more coarsely-ground pepper with my eggs, but you take what's in the shaker. At least we had it on the table, and didn't have to go steal it from another. I'm fine without the toast, but I really need bacon or sausage with my scrambled eggs. And I had MORE THAN ENOUGH of both!

My grandson loves breakfast buffets. Gavin will eat his weight in bacon! His mom never buys and cooks bacon at home. Tall and skinny, at 14 he is already 6'1". We aren't sure how much taller he will be, his father is 6'6" and my daughter is a fraction of an inch shy of 6'. He has been hanging out with his 23 year old cousin. Gage moved back to Minnesota after 3 years in Colorado and just got a job at Alpine Slopes as the snowboard instructor. Gage is just a little taller than his dad, who is only 5'8". Older cousin has to look up to younger cousin!

Kathy,
Buffets are a good deal for young men! Genius is 6', and my nephew, Sis's boy a little taller. Farmer H and I are both 5'8". So I guess Genius gets it from my dad, who was 6'2". The Pony will probably not exceed me and Farmer H.