The Man Who Sprung The Moon

If anybody could do it, Farmer H could do it. Could take a beautiful full moon, and warp it, squash it, collapse it, make it look all sprung and broken like the insides of an old couch.

Let the record show that we were visiting The Pony in Norman, Oklahoma, nearing the full moon on Thanksgiving, November 22nd. When we walked out to head to Golden Corral for our second buffet of the day, on Wednesday, November 21st, it looked as if the moon was already full. 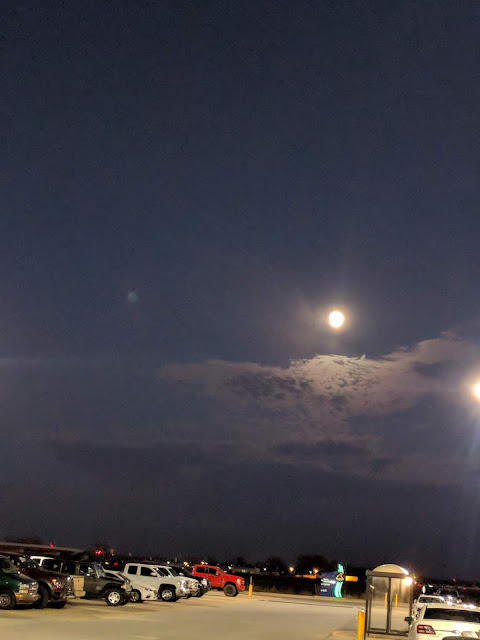 The Pony cautioned me about taking the photo. "Mom. Celestial objects never turn out well on a phone camera. They're not designed for that." Or maybe he was talking in code, trying to save me from the sweaving of Farmer H, who likes to drive off as soon as he's ready, nevermind allowing time for a passenger to get both feet in, close the door, and buckle up. No, there aren't two moons. That one on the right is a parking lot light.

When we were about two hours from the Mansion on Thursday, sadly without my little Pony, I tried again. The moon was just SO SPECTACULAR! 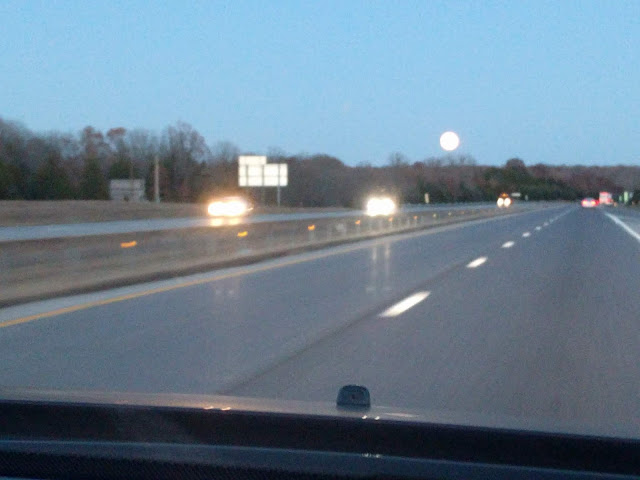 In fact, I didn't know the moon had risen. I asked Farmer H, "What town is THAT? Over that hill. I don't remember there being something big there, but I saw the lights glowing through the trees." Ha! The joke was on me, because the road veered, and I saw the moon pop up on the other side of the highway. Darn those cars for daring to drive down I-44 at dusk with their headlights on!

I was really trying to get a good view, through A-Cad's windshield, with Farmer H sweaving and hitting every bump in the road without even seeming to make much effort. 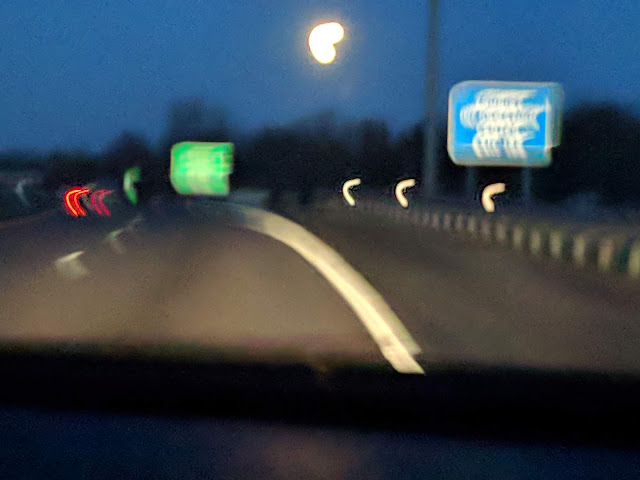 This would probably have been the pick of the litter, with darkness almost fully fallen, and the pattern of the guardrail supports, and the sign showing our location. But no. Farmer H had to sweave severely left, right at the instant I snapped the photo. HOW does anybody even squish the moon like that? And to refute Farmer H's claims that he doesn't drive off the road, I invite you to inspect the photo, which pretty much reveals that A-Cad's right-side tires are riding the white line.

One last try, as we left the interstate for our 79 miles of blacktop state highways and lettered byways to reach the Mansion. 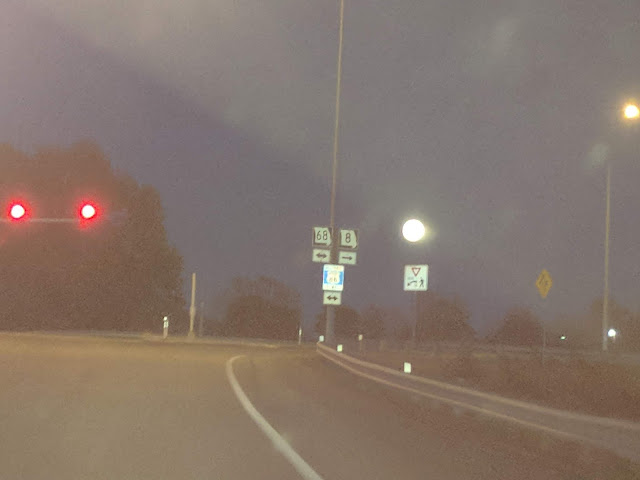 Yes, the fog was coming. I didn't think to warn it to watch its little cat feet, lest Farmer H sweave all over them. If anyone could do it...Farmer H could do it.
Posted by Hillbilly Mom at 1:27 PM

fishducky,
Apparently, the official name for this November full moon was the Beaver Moon. I didn't want to use that in my title. Gotta be careful what kind of traffic I attract!

Things are getting to the point where I really start worrying for your safety when I hear of a trip anywhere with Farmer H driving. Do you have one of those padded Sumo Wrestler suits you can wear for protection?

River,
You and me both! I do not have a Sumo suit, but we had them at school for a pep rally. My Arch Nemesis and the Spanish teacher next door to my classroom were in a battle, and it was hilarious.

Forgot to say how much I like the first two moon shots.

River,
That first one is a favorite of mine. Of course, I was already feeling mellow, what with a belly full of brunch, and looking forward to a second buffet for supper! Plus, I was on a casino parking lot, with my bankroll healthy from my wins. If only I'd known what was to come later, I may have been too blissed-out to even take the picture!