When I walked into the garage on Thursday, after treating my Sweet, Sweet Juno and (formerly known as Puppy) Jack with a handful of cat kibble, I was greeted with this sight: 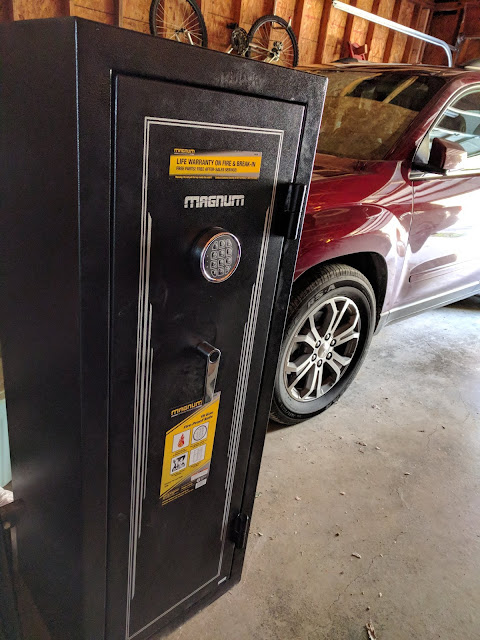 Looks like Farmer H bought himself a safe. Of course, he made no mention of such a purchase. I suppose he expected me to assume that this safe sprang full-blown from the hood of A-Cad. Or maybe not, since Farmer H has not even rudimentary knowledge of Greek mythology.

I DID overhear Farmer H asking The Pony to look for a key for a safe, online.

"But Dad, you're not the original owner."

"They don't know you have the stuff, either. How do they know that, just by asking online for a key? Don't robbers try to get a key to a safe to rob it that way?"

"Yeah. But they don't have the numbers and the owner's manual book."

"Maybe they steal that, too! Why did you buy a safe without a key?"

"It only cost me $5. Besides, I have everything for THAT safe! I'm talking about the one I have over in the BARn."

"We already have TWO safes in the basement to put money in!"

"There you go again!"

"Seriously. You have at least 6 that I know of. Two in the basement. One in the BARn. Now one in garage. I know you have a gun safe at your Storage Unit Store. And I'm pretty sure there's a gun safe in the workshop."

Saturday afternoon, I was checking my credit card balance on the 800 number. Huh. There was a mysterious charge for $292 and change. From a lumber/hardware store. I know Farmer H went to buy a new doorknob on Tuesday. In fact, he bought two. But he gave me the receipt for them.

That should have been my clue! I'm slipping, people! My membership card for Mystery, Inc. might be revoked!

So...I asked Farmer H, when I had him as a captive audience in A-Cad on the way to The Veteran's house for Christmas festivities, if he charged something for almost $300.

"Wait a minute! You bought a new safe? Without asking me??? I already told you last week that we do NOT need another safe. I was dead set against it! And now you bought one? For $292? You said you paid $5 for it!"

"That's the one in the BARn. That needs a key."

"You lied! You said you paid $5 for the safe in the garage!"

"Well...I call the BARn a garage sometimes. And I call the garage a barn."

"YOU DO NOT! You deliberately lied about that safe! Did you think I would never find out?"

"Well, you've been mad at me for two days. So I was just waiting until you weren't mad any more to tell you."

"That's bull! You thought I wouldn't find out! This is like when you disappeared one afternoon and bought a $1700 lawnmower without telling me. I didn't know until I saw you drive by and I wondered when the lawnmower changed color."

"You never forget anything! I did buy the lawnmower without telling you. Yes."

If Farmer H is planning to wait on telling me something until I'm not mad any more...he's going to need to wait a very long time.
Posted by Hillbilly Mom at 1:56 PM

Here's the $64,000 question: what is he hiding in all those safes? Have you checked your house lately for missing valuables? He's not secretly out robbing other storage units? Or getting more for his sales than he declares and stashing the rest away for a fly-by-night to somewhere he'll never be found? (I've been watching mystery crime shows on TV)

But you could keep all your important papers in that safe (if you had a key)!! On second thought that safe looks pretty big. Would Farmer H fit in it?

River,
I think he's a gun-runner! (That should get my anonymous blog investigated now, don't you think?) His safes are more valuable than our valuables! When I asked WHY we needed a safe that big, Farmer H said so I can get into it with the combination keypad and not a dial, and that 'guns will fit in it, too.'

***
fishducky,
Farmer H says he HAS a key and the combination to this new safe in the garage. It was deliberate misdirection on his part to pretend he bought it for $5 at the auction. I'm sure Farmer H would fit in it, although perhaps not with all his body parts where they were originally attached...

He does collect odd things. Safes must be one of his collections. It makes as much sense as some of HeWho's purchases. I hate it when he lies, then tries to justify it by twisting my words. Too bad they aren't smart enough to actually get away with it!

Kathy,
I think, at this point, he's collecting at least FIVE of everything in the world! Just admit it and get it over with, I say! Face the wrath, and move on, HOPEFULLY wiser.