There IS something to be said for getting up early. Like before noon. Not by many people who go to bed at 8:30 a.m., but some. Let the record show that I DID get a good OPC (Old People Chair) nap from about 6:30 to 8:30. So I really should have awakened before noon:30.
However... my alarm clock was three towns over, feasting at Steak N Shake. He couldn't call me, because he had taken the phone off my nightstand to compare with the new ones he was buying at the Devil's Playground. I turn my cell phone off overnight. So there I was, snoozing away like a royal princess without a pea, when I woke at 12:30.
I had meant to get ready and go to town before the weather moved in. You heard me. The WEATHER. Forecast was for SNOW! Falling temps all morning, chances of precip increasing to 55% at 1:00, and 85% at 2:00, then 99% at 3:00.
I saw it start a bit at 1:00, as I sat at the kitchen table with HIPPIE. The Pony returned, and said it wasn't bad yet. By the time I left at 2:00, T-Hoe said it was 37 degrees. When I got to town, it was 34. And nearly a BLIZZARD! At least I had my jacket. But the driving wind was brisk!
Still, the snow was kind of pretty, knowing it wouldn't stick around. And not caring anymore about snow days kept me from pining for six inches of accumulation. 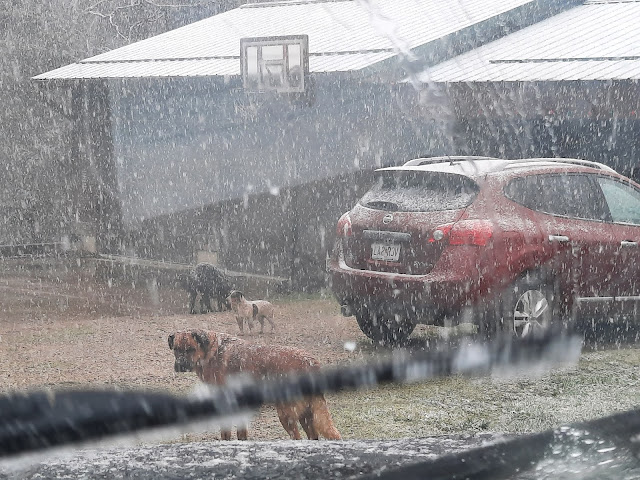 When I got home, Copper Jack would NOT get out of the way. Oh, not out of MY way. I had room to maneuver T-Hoe around him. He was in the way of JACK! I crept closer, and Jack stopped twisting around with Juno, so I had a (such as it is) clear shot of all three fleabags, and The Pony's car. Juno was looking kind of skunky, with a stripe of white snow along her back. 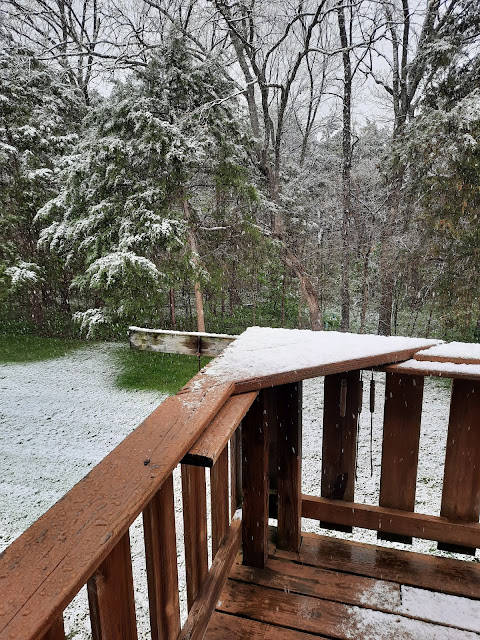 The snow didn't last long on the back porch, but the yard and trees held onto it. So pretty and green. I guess Farmer H's old BBQ utensils are enjoying the blizzard, hanging there in the corner. 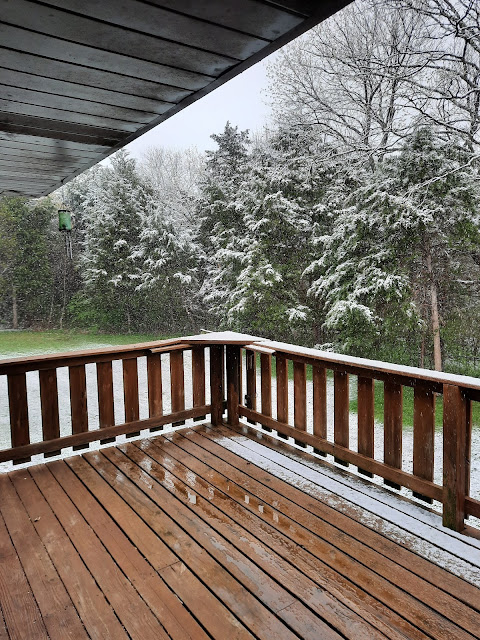 The Pony took the last two pictures for me, while I was getting my lunch together. Of course it was after he scratched the lottery ticket I brought him, and won $10. There's something I like about this one, with the slats in the porch rail.
I don't think this snow was too unusual for Missouri. I remember way back to my high school years, which would have been the 70s, when we had snow on May 7. That's the latest one I can think of, that accumulated on the ground. Of course, my VALedictorian brain may be filled with more pertinent data than the latest snowfall...
Posted by Hillbilly Mom at 1:07 PM

Oooh. The snow was so thick, I couldn't get out of my driveway yesterday, and had to call in to say I needed a sub. But lucky me. School was called off yesterday because travel was so treacherous. Tonight it's supposed to get cold again... so bitter that our kids will get frostbite if they venture outdoors tomorrow morning. So, I anticipate another day off tomorrow.

Well, I can always daydream and fantasize, can't I?

I did remind you a while back not to become dependent on The Pony as your alarm clock. I'm trying to imagine myself keeping the same hours you do. I don't think I'd manage at all.
I get up between 7.30am and 8am, go out to buy the paper, then eat breakfast, or sometimes the other way around, then I read the paper and do the puzzles before I turn on the computer, which then gets turned off around 6.30pm when I watch/listen to the news from 6pm and watch recorded movies or TV shows after that until bedtime at 10.30-11pm.

Some guy in the Gas Station Chicken Store said it was whiteout conditions on one of the -Ferry Roads. Tesson? Lemay? I didn't listen that closely. I'm not some weird eavesdropper hoping to turn a conversation into a blog post!

***
River,
The Pony IS my alarm clock!!! At least for a few more days, until his training starts. I don't know what I'll do then. Get up late, I guess... Or go to bed earlier.

You keep Farmer H hours. Except for all that reading.