Don't That Just Beet All?

Farmer H's idea of straightening up the kitchen is not the same as mine. Oh, he'll remove his snack food stash from half the kitchen table if specifically instructed to do so. And he'll clear away the random paper plates with notes, and old pocket-sized spiral notebook, and assorted tooly gewgaws from the kitchen counter by the door if I wave my hand grandiosely over it and declare that it has to go. But he won't remove EVERYTHING, preferring to push part of it against the wall. As if it then becomes invisible.

So it really wasn't a surprise when, in the middle of the Dec. 30 Christmas Dinner, that Genius asked,

"What's that red stuff on the kitchen counter?"

He was probably thinking it was some kind of alcohol, since behind it were two other bottles of alcohol, bought at auctions or estate sales by Farmer H. He's a buyer, not a drinker.

Can you believe that? He was saving something, and didn't even know WHAT IT WAS! 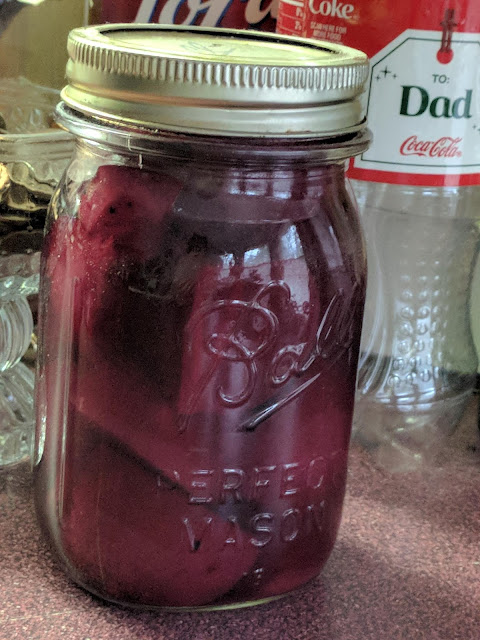 "Oh. Well. It's sitting on the counter. So I though you might know."

"I got it up at the storage units. It's preserves, maybe. Strawberry."

So I guess we're keeping them indefinitely. On the kitchen counter. Next to the empty Coke bottle that says "DAD." Given to him by The Pony on his birthday. A happy accident being that The Pony bought a bottle of Coke on our drive home from CasinoPalooza 3, and only later, when ready to throw the bottle away, noticed that it said "DAD." And thusly declared, "Oh, look. My Coke bottle says "DAD." I'll give him THAT for his birthday!"

If you're thinking that the Coke bottle sat on the kitchen counter about 1/4 full of Coke until three days after Farmer H's birthday...you'd be wrong. Farmer H saw the Coke bottle, and put it in FRIG II. The Pony thought it had been thrown away, and was a bit disappointed that he didn't have the gift to give, even though he told Farmer H on his birthday, "And I'm giving you my Coke bottle, because the name on it is "DAD."

I found it in FRIG II behind some other stuff when I was trying to make room for more stuff. So I washed it and let it drip dry, then put it on the counter by Farmer H's stuff, and reminded The Pony to tell him of his "gift."

Good thing I care more about helping people than The Pony. Farmer H would have been in for a rude awakening when he tried to spread those preserves on a biscuit. The more I look at the picture... I'm not even sure it's beets.
Posted by Hillbilly Mom at 2:08 PM

Hubby and I did up pickle beets this summer.
Coffee is on

I'm guessing that jar was left in a storage locker because NO ONE knows what it is in there. Could be pickled red cabbage stems, bamboo shoots in beet juice, dismembered parts of anybody....

Dora,
My grandma was a canner, and I know she pickled beets. They didn't interest me nearly as much as her dill pickles, with the dill we picked out by the pond. Farmer H still has a big jar of those pickles, and thinks they'd be fine. Seeing as how my grandma died when Genius was 1, those pickles are AT MINIMUM 23 years old! Now if Farmer H wants to eat one... who am I to stop him? He's been warned.

***
River,
I think Farmer H implied that somebody GAVE HIM the beets up at the lockers. Like a guy's wife, who made them this year.

Don't make me think of that Hannibal Lecter movie, where Clarice found jars of stuff in a car inside a storage locker!

Looks like BEETS to me!! Have you considered opening it?

fishducky,
Actually, I have NOT considered opening it. I have never tasted a beet, and have no intention of tasting what's in that jar, so I figure, "What's the use?" That same question describes how I feel about Farmer H keeping the jar, not knowing what's inside.