Lurking In The Shadows

You know how people sometimes take a picture, and upon later viewing, notice something in it they didn't plan on? I'm not talking about misty ghosts or strangers exposing themselves or premeditated photobombers. Not even awkward family photos, that seemed like a good idea at the time, but later ended up in a book or calendar. Uh uh. I'm talking about a detail that was overlooked.

Like this picture I took mid-snowstorm on Saturday, after the initial photo of the sidewalk right after the snow started.

Well. Now I've tipped you off, between that description, and the title. But when I first took the photo, and glanced at it, I just thought I was showing you how we'd gotten a bit more snow after a couple hours passed. And that Farmer H had driven his truck through the front yard, as he is wont to do, and hopefully to show you the flakes falling. They didn't get picked up by my phone camera. But something else did! 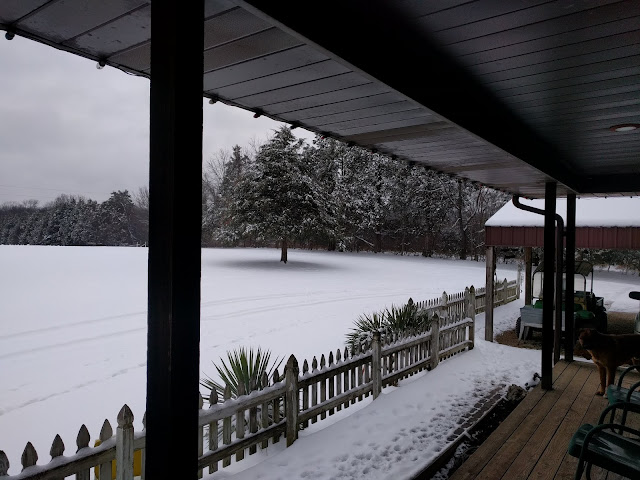 I'm sure you saw it right away. Down at the end of the porch. The shadowy silhouette of Copper Jack! I swear, when I first noticed this on New Delly's monitor, I heard in my head the REE! REE! REE! of the Psycho knife stabs!

I'm pretty sure Juno's heart was racing as well, at the moment I took the photo.
Posted by Hillbilly Mom at 1:50 PM

I couldn't see Copper Jack until I blew up the photo. He was hidden by your blog list!!

fishducky,
I actually moved that picture down, so he wasn't behind the follower pictures. I tried shrinking it one size smaller, but he was even less noticeable that way! He's a lurker.

He is hidden behind the blog list, but now I see him. I don't know about the ree! ree! ree!, since I have never seen Psycho, but I'll take your words for it. It's that high pitched violin screech, right?

He does look menacing. Does he ever go home?

River,
On HIPPIE's screen, he is peeking out from the blog list. I never thought about what instrument plays the REE! REE! REE! but a violin sounds right.

***
Kathy,
Copper Jack goes home when his human daddy drives by in his work truck. Or his human mommy in her car. He doesn't stay home long.