Mrs. HM Is Her Own Worst Enemy

Sunday, we had single-digit temps and uncleared roads. I didn't venture out in T-Hoe because...

Farmer H actually sent me a text asking if I wanted a soda from town! Of course I did! He brought me a 44 oz Diet Coke from ORB K! Seriously. Would it have been a hardship to drive another 1/4 mile to The Gas Station Chicken Store to get my magical elixir? I must say I was disappointed, but I've gotten my own magical elixir in the form of a Polar Pop before, so it wasn't a tragedy. It almost was, though, because Farmer H confessed that the lid had come off, and he nearly spilled it.

Even worse was what I did to my Farmer-H-delivered magical elixir. I dumped the powdered Sugar Free Cherry Limeade into it, but the last packet emptied itself without enough powder for proper flavor. No problem. I had another pack in the pantry. I peeled the film that prevented tampering, popped the top off the plastic container, and snipped the end off a foil packet. As I poured a generous helping into my 44 oz Diet Coke, I thought,

I put away the packet in the container and set it to the back of the counter. My first sip made me look again. APPLE! I had bought the wrong flavor! No mistaking that taste. Like pure apple juice. No hint of Diet Coke.

I cry shenanigans! The packaging is virtually identical! 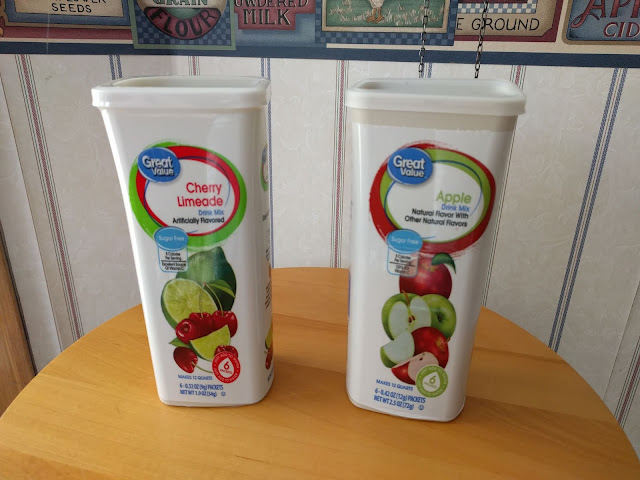 I will scrutinize the label tomorrow. Maybe I should ask Farmer H if he needs any powdered drink mix to keep at his Storage Unit Store, for when he wants to add flavor to a bottle of water.
Posted by Hillbilly Mom at 1:51 PM

The size and shape of the package is identical, as is the red and green swirl, but the images of the fruits are very different. I would suggest that you blindly lifted it off the shelf in the usual spot along the aisle without checking because that spot is always where the cherry limeade is. You got the wrong flavour because some other person picked it up to read the label then put it back down in the wrong spot.

River,
I think that's how it happened. It's across from the Diet Coke on the beverage aisle, and I grabbed it from the top shelf, its usual slot. I've done it a hundred times, but this time, I got APPLE!

The apple flavor was great if you want apple juice, but I didn't. That's why I haven't thrown it away. You never know when I might want that flavor.

Apple or Cherry Limeade, that is the question!!

fishducky,
That IS the question, and for now the answer is Cherry Limeade!

River is right! I am sure that you would have made the effort to put the wrong flavor in the right section had you looked closely. People just don't care. They will put non-sale items on the sale rack all willy-nilly making someone try to but it and then argue at the check out line. If they cause a big scene, the manager will just let them have it at the sale price rather than escalating the scene. Me, I will just sigh and tell them that I don't want the item. One would think I was genuinely good natured, but I like to pick my battles and am trying to create good karma, although that does not seem to be working for me lately. A free mop and bucket does not equal the 5 grand we just shelled out for the new well pump!

Kathy,
That's what I get for ASSUMING the flavors were in their rightful places. Only today, I saw a bag of some type foodstuff sprawled all willy-nilly on the shelf with the Hefty large bowls. I didn't look close enough to see if somebody had been engaged in a feeding frenzy, and needed their clandestine snack poured into a bowl!

FIVE GRAND! I could get three months of health insurance for that! With enough left over to buy 1/10 of a well pump. Just a little math problem to keep you on your toes.