Not Yet A Snowpocalypse

I did most of my errands yesterday, in preparation for the inclement weather rolling in today (Friday as I write this). All I had to do was mail the boys' letters, and that could have waited. However, the snow was just starting when I got ready to leave, so I ventured out.

The sides of the road, and people's roofs, and some car hoods were covered with snow. But it slacked off by the time I got home around noon. I got my pot of beans with ham and neckbones brewing. Looked outside around 1:00, and saw the snow had started again.

I also found (formerly known as Puppy) Jack waiting for me. 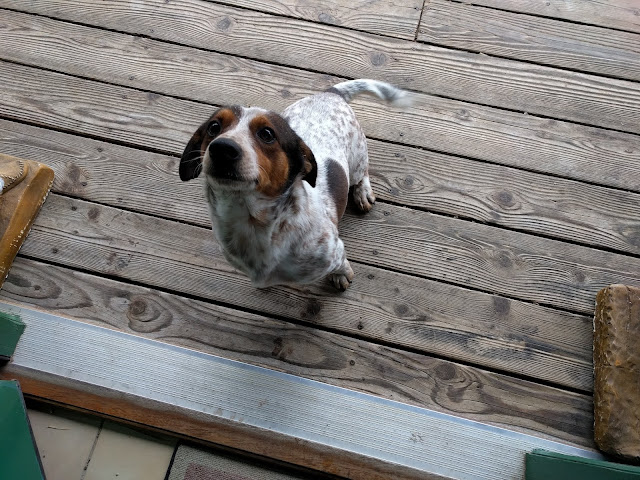 He's a good boy! Also a beans-with-ham-and-neckbones sniffer! I sadly turned him away with nothing. Don't you feel sorry for Jack. He'd already had a handful of cat kibble, and some tortilla ends left over from yesterday's Chicken Bacon Ranch Pinwheels. 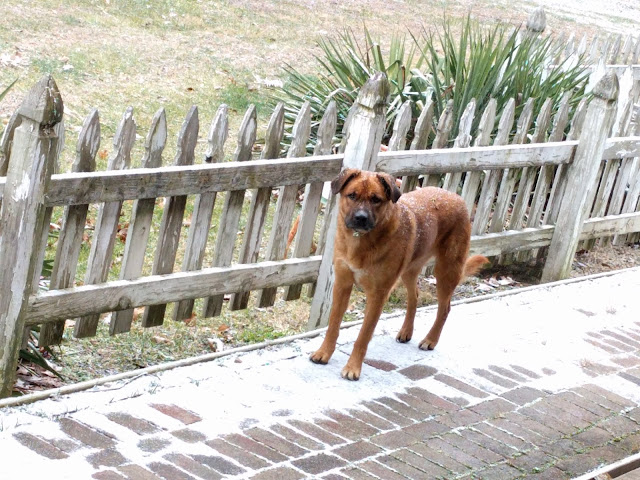 Copper Jack keeps his distance. I can't figure out why he detests me, what with him getting a treat every time my own dogs get one. He minds his Ps and Qs most of the time, with Juno going ballistic every time he comes up on the porch. Even though she was ensconced in her insulated doghouse with shingled roof, in the back porch alcove by the kitchen door, she would have come running if she heard his heavy footsteps on the porch. 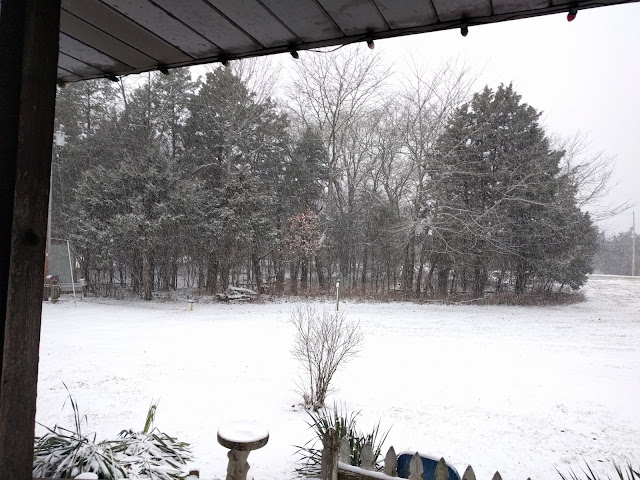 At this point, we might have had an inch or two of snow. Still looking for about 8 inches, according to the meteorologists. We'll see how that pans out.

Farmer H currently has me plugged into the internet by awkward, toe-snagging ethernet wire run from Genius's desk, across the basement floor, into my lair, and across my desk. If I don't break my neck, I'm hoping for uninterrupted blogging.
Posted by Hillbilly Mom at 1:27 PM

Copper Jack might just be jealous and would prefer that you invite him to join the family and get his own porch kennel.
I have extension cords running across doorways and along baseboards because there simply aren't enough power outlets here, to prevent doorway tripping, I have them duct taped to the floor, any coiled sections are behind doors out of the way.

I can see the wires in my minds eye. Living with HeWho, you know. Puppy Jack looks well fed, as does Copper Jack. You would think Copper Jack would like you, at least he respects his standing with you. I always make sure my dogs know that I am the alpha in the pack.

River,
There are actually two doghouses on the other end of the porch, the side by Shackytown. Jack sometimes sleeps in one, though in warm weather he prefers a hole under the Trailblazer, where he can be aware of all comings and goings out front. I'm sure Copper Jack sometimes sleeps over. I've seen him walking that direction, past the front window.

Farmer H rigged up this ethernet cord. It's not intended to be permanent. Genius would have a fit if he saw it!

***
Kathy,
I do like Copper Jack to know his place. He's a scary sight when he's barking at someone in the driveway.

I don't know why copper Jack doesn't like you. If you gave me regular treats I would let you be the Alpha!!

fishducky,
Seriously, what's NOT TO LOVE about Mrs. Hillbilly Mom???

All I can think of is back when Copper Jack was new to the neighborhood, he came over and stood barking his fool head off at me while I was IN MY OWN DRIVEWAY. I told him to "GIT!" So now I'm the enemy, I guess, on my own property, with a handful of treats.

Copper Jack was adopted by our neighbor to the right, who works for the City of Hillmomba. The workers found a litter of pups, and he said he'd take one, after being told they were part german shepherd. I don't see any shepherd in Copper Jack.