Exsanguinate Was Not On Mrs. HM's List Of Things To Do Sunday

I had very little planned to do on Sunday. Just a simple drive to town to pick up my 44 oz Diet Coke, and a side trip through the back alley of Farmer H's pharmacy store parking lot to Casey's, for scratchers. The whole thing would take less than 45 minutes. Even if, perchance, I found a penny to photograph and pocket.

It was shortly after noon when I left, having just stepped out of the shower, dressed, and grabbed my purse. The sun was shining, 58 degrees, a nice day for Farmer H and his Storage Unit Store. There was quite a crowd there when I drove by. I parked over by the moat at The Gas Station Chicken Store, counted up my correct change, and headed inside.

As I bellied up to the soda fountain, I saw that my thumb was bleeding. How did THAT happen? I didn't recall bumping it on anything. I sure didn't want anybody in the store to notice that I was bleeding out! That kind of thing is frowned upon. Nobody wants to see such a sight at the soda fountain, or take money at the register from a hemorrhaging hand.

There are strict rules in school about such issues, with a custodian being summoned with a bottle of bleach if even a drop of blood spills on the tile. I'm pretty sure food establishments have such rules. Even CASINOS in Oklahoma have a sharps container mounted on the wall of the restroom, to prevent folks from coming in contact with the blood of others at the ends of pointy objects.

I carefully reached into my right pocket for a tissue. Forgetting that I had just washed my jacket free of the smoke of the casinos, after removing the tissue I keep in the pocket. I hadn't needed the jacket due to the warmer temperatures, and in fact didn't even need it that day, once I got over the chill of shady garage-kept T-Hoe's leather seats. So there I was, without a tissue, and the fountain of blood now smeared across my thumbnail. Don't even suggest that I should have peeled a napkin out of the holder at the chicken counter! People don't want to see other people's blood around their chicken!

I awkwardly hid my spouting digit behind the foam cup of my 44 oz Diet Coke, and reached into my shirt pocket with my left hand, for my dollar to pay. I surreptitiously transferred my 69 cents of coins from my bloody hand to the good hand. Pretty sure I made it out of there without anyone saying "YUCK!" after I left.

The fact that I take an aspirin every night, purposefully to keep my blood thin, after my unfortunate bilateral pulmonary embolisms a few years ago, and that I had delayed taking my blood pressure meds until right before I left home... probably contributed to the outpouring of my life fluid. I swear I even SMELLED that blood while trying to hide it inside the store! Like Stephen King described it in Carrie. A coppery smell. 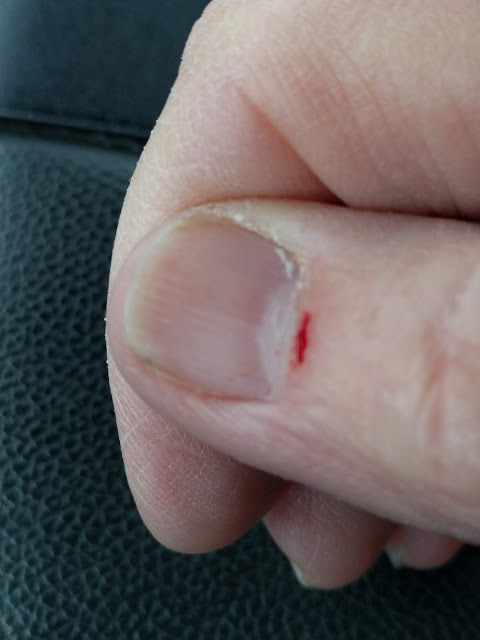 Oh, sure. Pooh-pooh my possible life-threatening injury! It looks GOOD, there. That's after I dabbed it five or six times with a Puffs With Lotion. And right after that, it started seeping again, on the way over to Casey's, so I had to soak up another Puffs full.

The wound finally sealed itself, on the drive home. Which lasted until I washed my dog-hands, and dislodged the tentative scab.

No, exsanguinate was NOT on my unwritten list of things to do on Sunday. Neither, apparently, was "put on lotion."
Posted by Hillbilly Mom at 2:03 PM

You can't think of anything at all you might have scraped it on? I would have reached for a dispenser napkin, not caring at all what people think. Far better than possibly dripping blood on the floor or counter.
I take a half an aspirin now and again, not daily, maybe three or four times a year, it thins the blood enough that my varicose veins stop aching enough so I can sleep. Usually when I've been on my feet far too long in one day.

River,
I have no idea! It seemed to happen as I got out of T-Hoe to enter The Gas Station Chicken Store. I saw the beginnings of it as I walked across the lot, but thought it would be a slow seep. Maybe I jabbed it with the keys when putting them in my pocket? Or got a cardboard cut from the edge of the scratcher I was cashing in? I didn't have any sharp objects.

My nightly aspirin is a concession to my doctor for the chance to get off Xarelto THE DEVIL'S DRUG, which made every joint in my body ache, and could result in uncontrollable bleeding with the slightest injury, the only antidote being the wearing-off of the drug's effects once you stop taking it! According to my regular doctor AND the pulmonary specialist, it takes THREE DAYS to be able to clot normally again. They made me take it after my pulmonary embolisms, but let me off after 6 months instead of a year, because I had a polite fit.

I'm glad the half-aspirin, quarterly, can have such a good effect for you.

I don't mean to be insulting, but have you considered a manicure?

fishducky,
No, I have not. As you can plainly see!