Here's why I bought some baking potatoes last week, even though Farmer H later told me that we had a bag of them from the Ponytail Guy. I couldn't see them on my kitchen table: 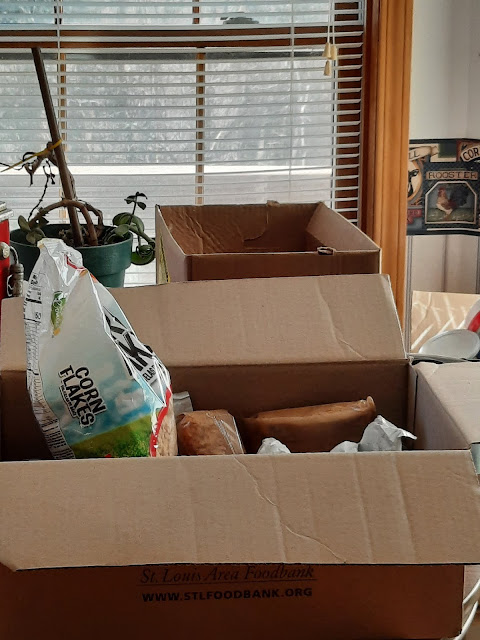 They were behind the most recent Ponytail Guy harvest. That's my view from the kitchen sink, looking across the counter. Huh. Maybe I should have looked at that jade plant more often! We might have finally killed it.. Anyhoo... that's the latest box of Ponytail Guy FREEbies. The bag of potatoes was behind it, hidden from view, and by the flap when I walked by. Behind it is a box with loose potatoes and onions, a couple of each. The box of new potatoes is on the floor. It needs to be sorted, and some tossed off the back porch. That's a job for The Pony!
Here are the goodies inside that table box: 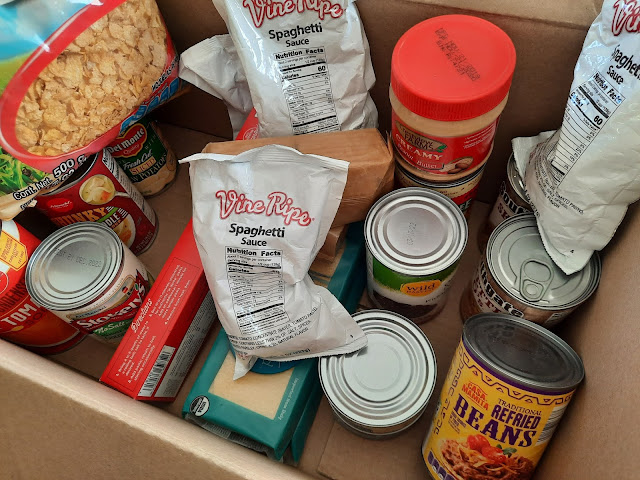 I moved some around so you can see better. We have refried beans, a stack of two tuna cans, two flip-top cans of Spaghettios, red kidney beans, two boxes of lasagna noodles (no-cook), a jar of creamy peanut butter, four pouches of spaghetti sauce, two packs of graham crackers, a box of spaghetti noodles, a dented can of corn, a can of chunky chicken noodle soup, a can of tomato sauce, a can of potatoes, and a giant bag of corn flakes.
Maybe next week, I'll experiment with a lasagna.
Posted by Hillbilly Mom at 1:07 PM

You know, you could use the refried beans, and some salsa (if you have some) along with some shredded cheese to make Mexican lasagna. Corn could be added, along with sour cream and browned ground beef.

I like the freebie contents. That jade isn't dead, give it some water, about a half a cup, and stand it in a patch of sunshine.
If you're going to be throwing potatoes off the porch, make sure they land in a compost heap or compost bin. They will grow and soon you'll be eating homegrown spuds :) Well, by soon, I mean in about six months or so depending on how fast they grow.

Sioux,
But I don't LIKE Mexican lasagna. Come to think of it, I don't like regular lasagna, either. I DO have salsa. I have everything but the ground beef, which I used to make a delicious meatloaf that lasted three days. I DO have some storebought ground beef in FRIG II's freezer, from before the FREEbies. I'll ask Farmer H his thoughts on it. The Pony will eat regular lasagna, but not the Mexican. So he will also be surveyed.

***
River,
It gets sunshine every morning, until around noon when the sun moves to the other side of the Mansion. I'll give it a drink.

We toss our aging produce off the back porch, to the treeline of the woods. Who knows what's growing out there! Sometimes the dogs will grab a potato and run around with it like it's a toy. All the REAL toys are in Juno's hoarder dog house.