We have SO MUCH FREE FOOD from The Ponytail Guy that it is coming out our ears! In an effort to use up some potatoes a couple days ago, it made me think of a story from a Little Golden Book, perhaps, about a kid who wouldn't wash her ears, and POTATOES grew out of them!
Maybe it was a little boy. Maybe I'm projecting. Maybe I'm having a flashback! I don't recall having dirty ears, or refusing to bathe. That was the rule. Come in from playing, take a bath before bed. Maybe the book was a bedtime story and I dreamed the rest.
Anyhoo... the point is that we have a plethora of potatoes. FREE. But I went to the store to buy three giant baking potatoes! I'd promised Farmer H and The Pony baked potatoes with the meat loaf I made from the FREE 2 pounds of 80/20 ground beef supplied by the Ponytail Guy. In fact, just before I left for my 44 oz Diet Coke, I told The Pony to open up the 10-lb bag of potatoes, and set out the three biggest ones for baking later with supper.
"I'll scrub them now, and they'll be ready to go when I come up to cook."
"How am I supposed to open this bag? It's like cardboard with a net window."
"Here. Use my kitchen scissors. WAIT! When did I have TWO pair? Oh, well. Here. NO! Why did you cut the whole top off? How are we going to keep them in the bag now? It'll fall over and spill!"
"Um. Mom. We have a bigger problem than that. Even the biggest three potatoes won't be enough."
The Pony held up a handful of NEW POTATOES! The tiny kind!
"Looks like I'm buying baking potatoes in town! Good thing we found out before I left!"
Anyhoo... Farmer H and The Pony had baked potatoes with their meat loaf, but I left mine for The Pony to bake another night. He wasn't planning to eat leftover meat loaf with us Monday night, because he was having a robust Steak N Shake lunch. I decided to use up some of the new potatoes by roasting them in the oven. 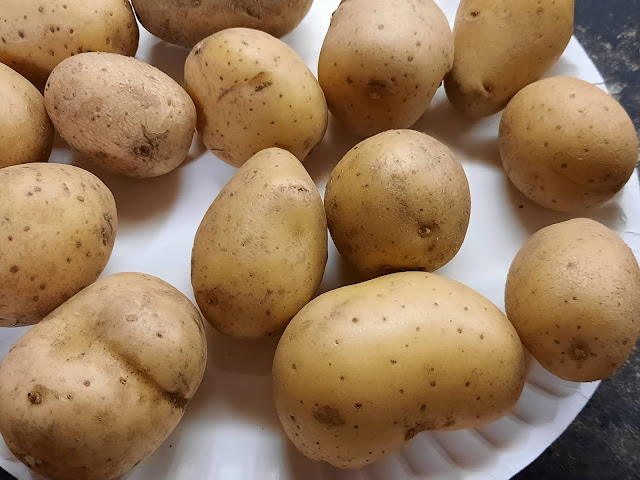 Here they are, all clean and dry, before I halved or quartered them. Heh, heh! One looks like a butt!
I tossed them in a little vegetable oil, and shook on the Hidden Valley Ranch powder. 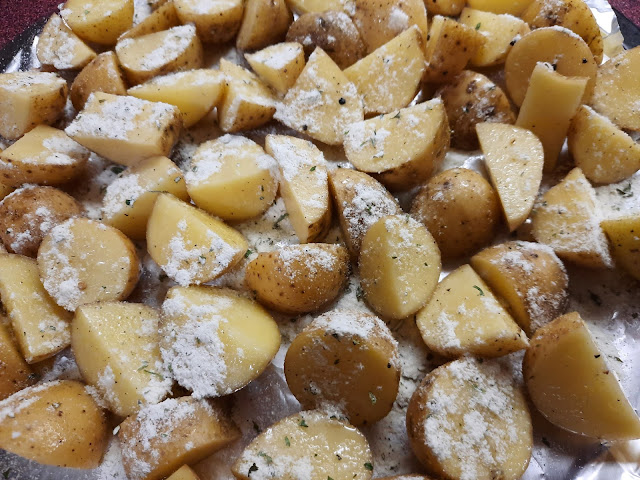 Also a tiny bit of ground black pepper (I'm not a fan of pepper). Then I slid them into a 450-degree oven for 25 minutes. 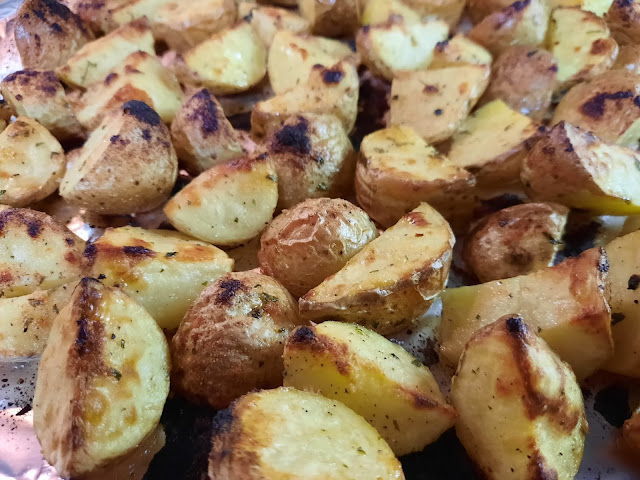 Mmm... they came out just right! A little bit crispy in parts. The innernets say they're not so good warmed up the next day, because they won't crisp. Then again, the innernets said to coat them with minced garlic and cook at 450 for 35 minutes. Good thing I read the comments where people said their garlic burnt up! No garlic on our new potatoes this time. The solution seems to be to add it the last 15 minutes if you use it.
Farmer H said the potatoes were delicious. As for the baking potatoes, he said,
"There's a whole bag of them behind the box of canned goods on the kitchen table."
Good to know. NOW.
Posted by Hillbilly Mom at 1:02 PM

They look delicious. I always peel mine, I prefer them without skins. I know the skins are nutritious, but I eat plenty of other nutrition. how did you not see a bag of BIG potatoes on the table? Is the box of canned goods so large it dwarfed the spuds?

River,
I'm not peeling 1-inch potatoes! There wouldn't be enough potato left to cook, and there would be too much of my finger-skin ready for roasting.

The box is big. It's as long as the cutting block. With it sitting at the front of the table, I can't see over the open flaps. I assume the bag of big potatoes is laid down, not standing up on its end. All I see is box flap and window shade. Can't see any of the table behind it. The Pony is in charge of putting the food in the pantry. I guess I need to spur him on.

We've put about half of it away, or eaten it! Maybe I'll get a picture of the contents, if I can remember, and then put it away.

My former campers, a couple of ladies who are partners, brought me some free food yesterday. I had just bought potatoes and they brought me 10 lbs along with two packaged of salmon and a bag of pears. I called my other campers to force the potatoes on them. WE refer to the food as the lesbian offerings. Not meant to be offensive, just funny.

Kathy,
I guess in your neck of the woods, lesbians are the new Ponytail Guy!