The Only Thing Missing Was Garfield

I made the FREE lasagna! Mostly free, anyway. The Pony was my sous chef.
We started with ground beef that I had in the freezer. Not exactly free. Farmer H said he'd rather have hamburger in it than the free crumble sausage from the Ponytail Guy. So I fried the ground beef while The Pony worked on the sauce.
He used a packet of the spaghetti sauce from the FREE box of food we had on the table from the Ponytail Guy. It had a delicious smell, like the sauce in the can from a box Chef Boyardee pizza mix. He also added some 4-cheese spaghetti sauce from an open jar in FRIG II. We're a saucy family. Some minced garlic was stirred in. And a packet of sugarless sweetener, because we like a sweet sauce.
THEN The Pony buttered my glass baking dish. I think it's Pyrex. About 20 years old. Maybe older. It's the 9 X 9 size.
"Oh, look! It's rose-colored. I'm looking through rose-colored glass! Ha ha!"
"Um. You're looking through STAINED glass from years of popping grease buildup that won't wash off. I'm pretty sure the color of that glass is amber."
"It's just the right size."
Indeed. The imported organic no-boil lasagna noodles fit two-to-a-layer in my square dish. First went a layer of sauce on the bottom of the buttered pan. Then two noodles. More sauce. Hamburger. And the cheese.
The FREE blocks of cheese were over in the BARn. With a fresh layer of freezing rain that kept us from making our semi-monthly casino trip, I didn't want to send Farmer H or The Pony over to get one. So I used a bag of shredded mozzarella that expired on Jan 29 that was in FRIG II. It was unopened, and smelled fine.
We got four complete layers in the lasagna, and added a noodle/sauce/cheese layer to the top. I covered the dish with foil, and put it in the oven for 45 minutes at 350 degrees. With 10 minutes left, I took off the foil. Here's the result: 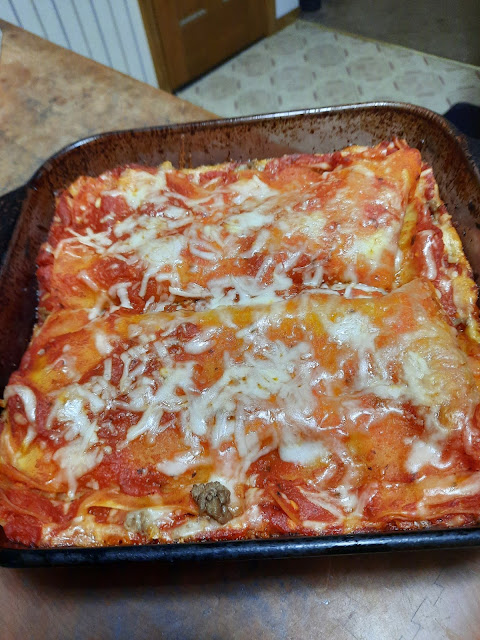 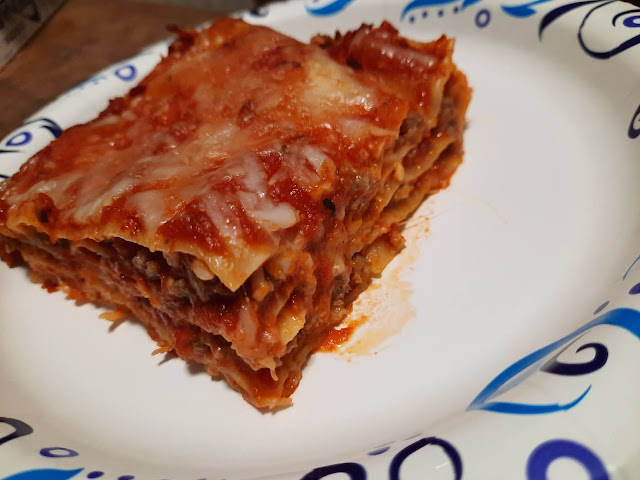 The Pony took the first piece. He was willing to sacrifice it if the digging-out-with-a-spatula process had gone awry. It came out perfectly! There it is, on our finest china, the small coated paper plate. 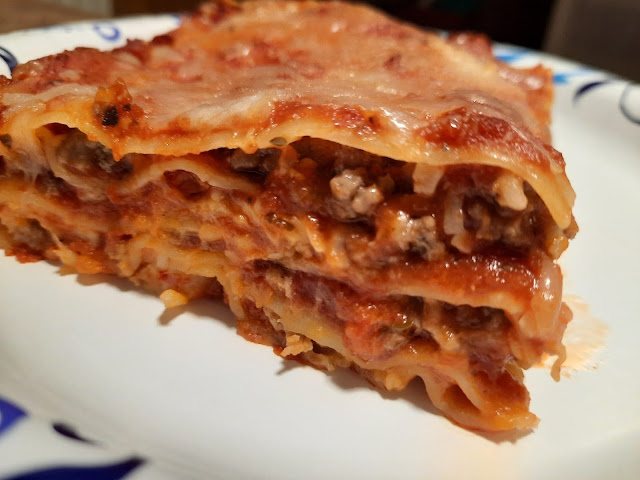 There are the layers. You can't see the cheese very well. The noodles were fork-tender. I must say, I'm not a lasagna fan, but I'd eat this version again! We all had huge portions. Farmer H and The Pony loved it. In fact, The Pony ate the remaining portion for seconds.
We still have a whole pack and half the current pack of lasagna noodles left. I might talk the guys into a sausage version eventually. But I don't mind buying Save A Lot ground beef. It's the best in Hillmomba.
Posted by Hillbilly Mom at 1:05 PM

These are dried lasagna noodles? Whenever I use those they never come out soft enough, so I par-boil them before I start assembling the lasagna. It complicates the whole process so I haven't made lasagna in years.

I would suggest you make a 9 x 13 pan of lasagna next time. It might result in some left-overs for lunch the next day, and lasagna is even better the next day.

I wouldn't make it too often. Farmer H and The Pony might expect gourmet meals like this every night.

River,
They are dried, but the box says they are no-boil. Maybe not those exact words, but it's on the box. I consulted my estranged BFF Google, and found out that indeed there are lasagna noodles that need no boiling. They soak up the sauce while baking. I have no idea what they cost, because mine were FREEEEEEEEEE! Anyhoo... that's how I figured out how long to cook my lasagna, and the temperature.

***
Sioux,
I seriously thought we'd have a serving left over for Farmer H's supper the next day! Even Farmer H had told me, before plating, that he didn't want a fourth of the lasagna. Then he changed his mind upon looking at it, and ate every crumb. Not that there were crumbs. It was moist.

It took about 20 minutes to put together, since I had to cook the ground beef. Then 45 minutes to bake. The Pony was back with an empty plate before I even had my portion out of the dish! That's why I hate cooking for these two. I might as well inject their food intravenously. Less clean-up, and less preparation. I sit down and take my time.

I have enough left for at least 3 more lasagnas of this size. Maybe 5 more. I DO think it would behoove me to use the 9 X 13 dish next time. Hopefully The Pony will help again, and won't consume the future leftovers.

I always used my 10x12 roasting pan since there were six of us and there were never any leftovers. I think I crammed about 6 layers of noodles in there each time.

River,
I would like to have gone another layer, but we didn't budget the ground beef for it. I didn't know how high the stacks would go. I can't guarantee there will be leftovers from just the 3 of us if I use the big pan!