Remember when The Pony made his gnocchi? That plate he put it on? 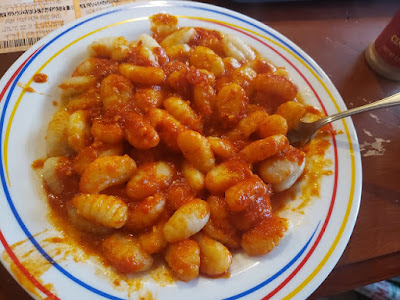 Those are our standard dinner plates. We have 8 of them, in a stack in the cabinet above the counter where I prepare all my foods, and where I take occasional pictures of psycho-opened packages of batteries. It's the cabinet to the right of the stove, the left of the sink. Handy for grabbing plates and bowls as needed.
These are big plates. Stacked on top of them are the 8 dessert plates, and on top of them are 4 little bowls of another kind that belonged to my mom. When I want a dinner plate, I slide them out from under the dishes stacked on top of them. Not a big deal. After I've washed such a plate, and it has dried in the dish drainer, I slide it back into place, under the dessert plates and bowls. [Let the record show that I am an old lady, with arthritic joints, no taller than The Pony, and with an ample belly that butts up against the counter as I reach shoulder-height for a plate.]
The Pony takes out the stack of 8 dessert plates and 4 non-matching bowls. Then he gets his dinner plate. A little odd, but nothing to sweat about. HOWEVER...
Since he made his gnocchi on January 21, he made a plate of pasta with garlic oil or something. No sauce. He left down the 8 dessert plates and 4 bowls. Left them sitting on the end of the kitchen counter that holds the sink.
"I'm leaving those down until I wash my plate and put it away. It's easier."
Uh huh. In Ponyworld. It's easier to walk those 8 dessert plates and 4 bowls across the kitchen to the end of the counter. Easier than LEAVING them in place to start with, and simply sliding a plate out from under them. Easier than setting them down on the counter in front of the cabinet, taking out a plate, then lifting them back into the cabinet. Uh huh. Easier to leave them sitting out for TWO FREAKIN' WEEKS!
Maybe more! I was the one who actually washed The Pony's plate the next morning after his feast. Since he'd left it on the counter rather than doing it before his nightly soak in the big triangle tub. [At least he'd rinsed it.] Of course there's no hot water during the tub-filling and for a bit afterwards. No dish-washing can be done with such cold well-water.
I asked The Pony several times if he'd put the dishes back. Of course he would. He was quite agreeable. But he always forgot. Or said he'd do it in just a minute. Or that since he was planning on using a big plate the next day, he was going to leave them out until it was eaten off of and washed.
Yes. I put the stack of dishes away myself. The Pony has not remarked about their relocation. I hope he won't starve to death, from the inability to remove a dinner plate from underneath them.
Posted by Hillbilly Mom at 1:03 PM

Here's what you do: Grab that Pony by his ear, march him to the kitchen and make him pick up those plates and bowls and put them back where they belong. Every time until he learns.

He COULD take his plates into the triangle tub, and wash them while he washes himself. It's not as good as washing dishes or preparing a meal while in the shower, but The Pony will have to make do.

River,
That is so very tempting. But I have PTSD about getting LOCKED OUT, supposedly by accidental phone-bumping into the lock button... When the weather warms up, I will have a better chance of surviving such "accidents."

***
Sioux,
Heh, heh! There is actually a big triangle tub story coming up Friday on my other blog. It does not involve food preparation or dishwashing. Not even a Mackinaw peach, or Kenny Rogers Roaster chicken.