Turkeying Around With The Pony

You may recall that The Pony deigned to dine on the turkey pot pie I made with the FREE ground turkey roll provided by the Ponytail Guy. Instead, I provided him with some browned ground turkey, and he made TACOs with it! 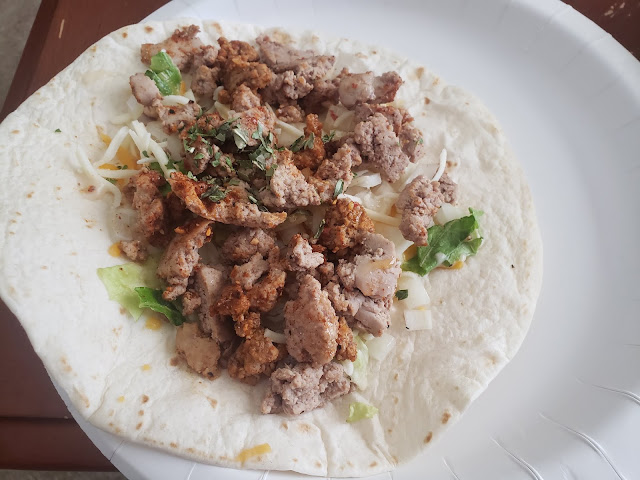 He made 3, and this is the last one, after Farmer H said he didn't need all the browned ground turkey that I'd simmered in taco sauce for his lunch. So this Pony taco has extra turkey. 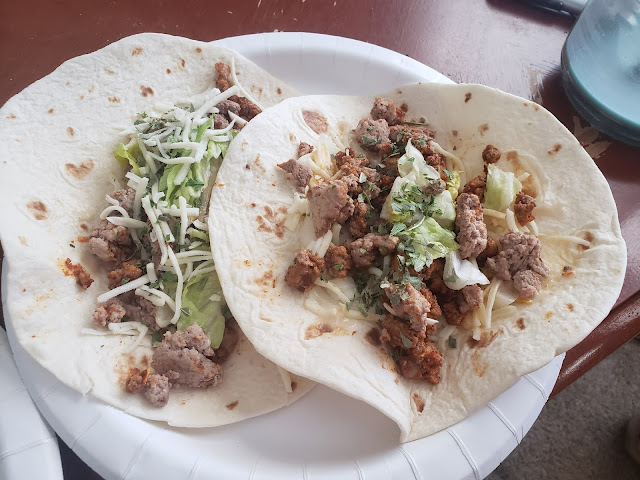 Here are The Pony's original 2 tacos, put together as Farmer H was dishing up his standard tacos with salsa, cheese, lettuce, and sour cream. Those are not ingredients The Pony chose.
I wish I'd paid more attention as The Pony rattled off his fixin's. Sadly, my eyes glazed over and my mind took a vacation, like when Farmer H starts talking about his weaponry and prices.
The Pony put his ground turkey on the tortilla, then shook on some powdered taco seasoning from the packet. He did not want his turkey simmered in the sauce. He also sprinkled it with some kind of spicy oil. White shredded cheese used by Imo's Pizza. Some oregano, I think. Or some other dried leafy spice. At least he DID use lettuce. So I can pretend it was kind of a normal taco.
Let the record show that The Pony ate at the marred coffee table. And that when I stood up from the short couch after conversing with him and Farmer H, while they finished their lunch... I stepped on something cold and slimy with my bare foot.
It was a piece of ground turkey.
Posted by Hillbilly Mom at 1:01 PM

Aaaah! Stepping on something cold and slimy! Oh Yuk!

River,
Farmer H needs to put SIDES on that coffee table, and turn it into The Pony's TROUGH! I wonder if it's IRONIC that I stepped on a piece of ground turkey that was ON THE GROUND! Making it LITERALLY a piece of GROUND turkey. I'm still not clear on this whole concept of irony...

You could have Farmer H create a stainless steel "trough" right next to the sink. He and The Pony could belly up to the trough and then when they're finished, you could just hose it down.

Make it easy on yourself (sang Dionne Warwick).

Sioux,
Did Dionne sing that to her Psychic Friends? I could sing it to my psycho family, as they're eating at their trough.

I like that trough idea, but it might not work unless a TV is mounted on the wall above it.

River,
If a TV is to be mounted on the wall, then Farmer H will do the mounting. Definitely NOT The Pony! Even if he cared enough to do it.