Mrs. Hillbilly Mom has earned herself a new name. The Discombobulator. Kind of like The Terminator. Only not as final.
Tuesday, I stopped by the Gas Station Chicken Store to cash in some scratchers. I didn't get my 44 oz Diet Coke!!! That was intentional. I was headed to Hardee's, remember, to feast on old grease. It might have been just as well. The Woman Owner was behind the counter. I pointed out that I was not getting my magical elixir, and she nodded toward the soda fountain.
"Man Owner is looking for some soda."
I guess he was putting in new syrup in the giant plastic bag that hooks up with a hose underneath the fountain. I glanced, but didn't notice if he was working on my Diet Coke.
I had a $50 winner to cash in. I bought $16 worth of new scratchers. While at the counter, a man came in to wait impatiently at my side, not behind me where the line belongs. And a woman came in to ask about the red ticket free gas weekly giveaway, although the number was clearly posted on the front wall, where it has been for many years.
"Okay. That's two $3 tickets, and two $5 tickets. I owe you back $34. It seems so odd without your handful of change for your soda. Today, I'm giving YOU change!"
With that, she reached out by the open slot in the bottom of the plexiglass barrier, and dropped COINS into my hand. I was a bit surprised. I hadn't been paying attention, because I'd actually asked for THREE of the $3 tickets, but she forgot the Bingo. I wasn't going to make her get one and ring it up again, because people were waiting. But I was calculating my change.
Whereas I'd been expecting to pay $19, and get back a twenty, a ten, and a one... I now was facing a twenty, a ten, and FOUR ones. Yet she gave me NO BILLS! Just coins!
"Um. I should get back more than that..."
"What? Uh... OH NO! What's wrong with me? Let's see... OH! I gave you 34 CENTS, and I owe you 34 DOLLARS! Here, give me back the coins."
I don't know why I make her so nervous. I'm a calm person. Really. Not in any hurry. I chat if she starts talking to me. This time, she's been telling me that she hadn't had caffeine in 25 years, because her doctor forbade it. We didn't get around to the reason, because the other customers came in.
Why are mistakes always like this? Giving me back LESS. She COULD have erred in my favor, you know, and mistakenly given me $3400! Of course I would have informed her of the error...
Anyhoo... fresh on the heels of yesterday's greasy stubby fries debacle, thanks to HARDEE'S...I now present a proper box of fries from Burger King: 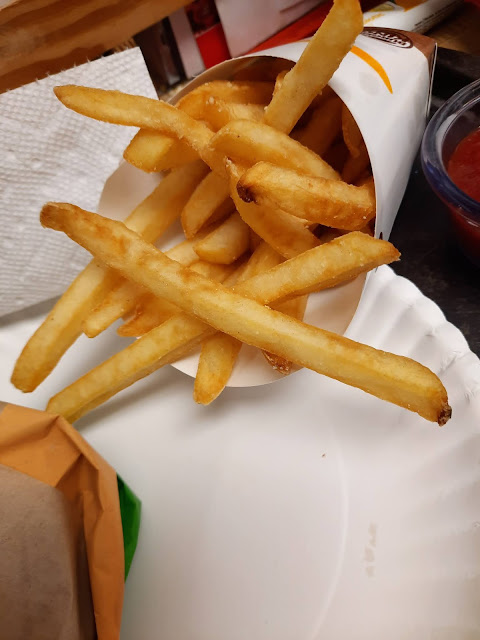 I didn't even pose them. That's how they fell out of the box when I took them out of the bag. They were real, and they were spectacular. I put the picture here so I can scroll down to yesterday's post and compare them to the travesty that was HARDEE'S fries.
Posted by Hillbilly Mom at 1:00 PM

But no Terri Hatcher?

Did you have to wrap yourself in a towel and step into a sauna before those real and spectacular fries fell out of the box like that?

Now those look like decent fries, I'd be happy with those. Without ketchup though, I like them plain and salty.

Sioux,
Nope. I didn't even have to stumble when I grabbed one!

***
River,
They were salted JUST RIGHT! Goldilocks herself would have given them an exemplary review. Even I could have eaten them without ketchup. COULD have. But I didn't.