They're Not Even TRYING Any More

Farmer H dropped me off at the hospital door for my regular 6-month doctor (NURSE PRACTITIONER) appointment on Thursday morning. The clinic is upstairs. Only four floors. We're not in the CITY, you know. This might be the tallest building in the county.
Anyhoo... I strapped on my St. Louis Blues mask, and entered the lobby. I was greeted by a man in slacks and a long-sleeved (rolled up) shirt. No tie. I think maybe he had an ID badge. His cohort was a lady sitting on a rolly chair, wearing scrubs. She had ID on a lanyard. Shirtsleeves asked me matter-of-factly if I'd had a cough, fever, diarrhea, etc. in the past two weeks. Nope.
Here's the thing. For a minute, I thought I might get past him to the elevators (TWO). He wasn't at all aggressive in his duties. Not even armed with a temperature gun.
"Why are you here?"
"I have an appointment upstairs."
Shirtsleeves slapped a sticker on my shirt sleeve. Didn't fill it out or anything. I took a picture at home when I realized it was still stuck there. 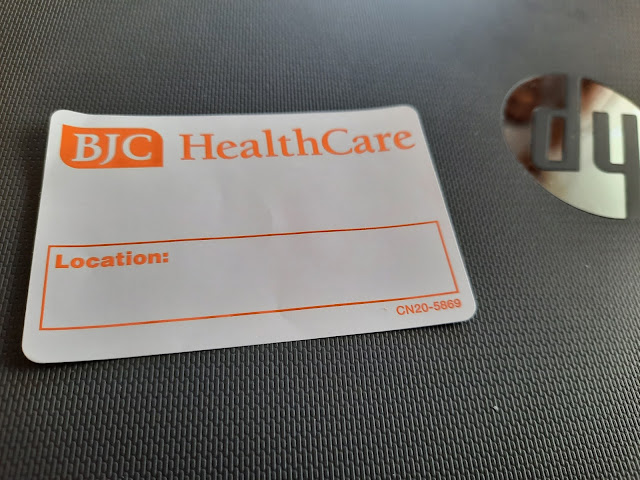 What good is THAT? I could have stolen a sheet of them. I could use it another day, to wander willy-nilly all over the hospital! Maybe they have different colors for different days. But there is not an infinity of colors. They're gonna repeat sometime. At least they USED TO write the date on the sticker. And the doctor (NURSE PRACTITIONER).
There were two people waiting for the elevator, but it lifted off before I waddled over there. The sign said no more than 2-3 people per elevator. I got in with one lady. She was at the controls, and I stood in the opposite corner.
The reminder message had told me to arrive at 7:50. The glass windows were shaded. So I stood leaning over the rail, looking down into the lobby. That place was  dead. Two workers came in carrying two large black trash bags overstuffed with black balloons. It was some doctor's 60th birthday, according to my eavesdropping skills.
Finally my office opened their window. I checked in without a copay. They said they'd bill it. Not touching MY filthy lucre, eh? I was the only patient there. Usually, they schedule three per time slot. I was put in a holding room to away the NP. A nurse took my BP. 126 over 78. Which is good for me. She had just caught me BREATHING, too! With my mask pulled down when she entered. I confessed, and she said, "Oh, that's no big deal."
The NP came in, and started punching in my refills on his laptop that swings out on a metal arm. He didn't even WASH HIS HANDS! He ALWAYS washes his hands. But not this day. That's okay. He barely touched me. Just a stethoscope on the chest and stomach. Didn't look in my eyes or ears or nose or throat. Nobody took my temp, either! Just a pulse-ox on my finger, that was 99 (oxygen) and 60 (pulse). I even told the NP as he was dismissing me,
"It will take me longer to get up off this chair than the exam took!"
Maybe he felt guilty. He offered his hand to help me stand. As I waited for my knees to unstiffen, he said,
"Bless your heart."
WAIT A MINUTE! I'm pretty sure that's an insult in the south! I'm hoping he was just making conversation...
The gal at the desk asked if I wanted to schedule my next appointment. Um. NO! It's in 6 MONTHS, for cryin' out loud!
"No. Who knows what I'll be doing then. I'll call."
I headed up to the lab, to give two vials of blood. I was the only patient. I caught the window gal with her mask on her chin. She pulled it up toot sweet! I had barely settled my ample rumpus on the cushy bench when I got called in for bloodletting. On the way out, I passed one guy headed to the lab.
I guess Thursday mornings are slow at the hospital.
Posted by Hillbilly Mom at 1:06 PM

I think people are getting lax. Perhaps each loosey-goosey person aspires to be a personal super-spreader...

Sioux,
I don't buy into the super-spreader narrative. Now I must postpone tomorrow's very special title to expound upon this topic. You, especially, will be quite disappointed to have such a title delayed by a day. I can't give you any hints, but I'm not JOKERing...

126 over 78 is great, I wish my BP was that good, it hovers around 140-145 over some acceptable number, which is a whole lot better than 183 over 110 that I had two and a half years ago. At last testing my oxygen was 98 which I'm told is excellent for an asthmatic.
I'm glad you are staying healthy.

River,
Mine is usually around 138 over low-80s in the doctor's office. I guess I just don't give a rip any more about the stress of the appointment. Maybe it's because I had the first appointment, and wasn't stewing from sitting there 45 minutes waiting. I bet that's it!

My oxygen used to be about 96. But that could have been when I went to the ER with my gallstones, and then with the blood clots in my lungs. Also, this time I was in a different exam room for my appointment, with a flipped layout, and I had the pulse-ox put on my RIGHT hand index finger, instead of my left. I wonder if that could have an effect.