While The Farmer's Away, Mrs. HM Won't Pay

With Farmer H gone on his mini-vacation for three days, I've been kicking up my heels and enjoying my time that is actually MY time. No one to cater to. No deadlines for fixing supper. In fact, I've been having my supper lupper carried-in, and then I can remain in my lair without hiking up those 13 rail-less steps to throw something in a pan to sizzle for Farmer H's supper. You know something else?
MRS. HM DON'T PAY!
I see no reason to use my weekly allowance to buy my own fast food during these three days. After all, Farmer H is dining high on the hog, probably taking The Pony out for STEAK every night. That's their usual restaurant choice. With Farmer H soaking up the house budget money on the credit card, with a two-night hotel stay, sight-seeing visits, gas, and meals... I figure I might as well take my own (much-less) share.
Monday, I went by Burger King, and picked up a Whopper meal and a mini chocolate shake. They were delicious. Tuesday was rainy, and I decided to stay in Hillmomba proper, and try the same kind of meal at Hardee's. I am now filled with old grease and regrets. 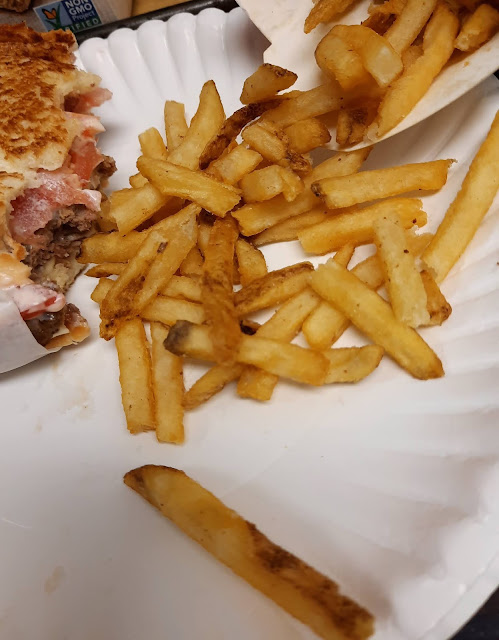 Look at my fries. It's like they were scooped out the bottom of the bin. The leftovers from the lunch rush. The BIGGEST one is right there in front. Kind of hard to grasp those stubs to dip them in ketchup. What good are fries if not dipped in ketchup? The entire container of fries was filled with STUBS! And they tasted like old grease. In fact, I didn't finish them. I only ate about 1/3 of the container. That might seem like a lot to you, but Mrs. HM is not known for her dainty eating habits, nor not finishing what's on her plate! Those are now DOG FRIES!
I had high hopes for my burger. It was a Frisco Angus Burger. Angus beef patty with bacon, tomato, mayo, and swiss cheese on sourdough toast. I really wanted to like it.
But it also had that old grease taste.
Of course I'm going to tattle to Farmer H, and show him this picture. One of his buddies owns the Hillmomba Hardee's. Maybe he doesn't know what his staff is up to. Or maybe they're going by his policies! Just a heads-up for his business. I won't be going back for quite a while.
Oh, I also had a strawberry shake from Hardee's. It was not thick and delicious like my Burger King mini chocolate shake. It was liquidy. In the past, I've found Hardee's shakes to be tasty and thick.
I hope they weren't using old grease in the shakes...
Posted by Hillbilly Mom at 1:01 PM

I'll make a note so if I ever go to America (highly unlikely) I will never buy meals from Hardees. I'd need a whole pan of freshly made brownies to get that grease taste out of my mouth.

River,
Yes. Make that note. We can't depend on my Brownie Chef to be here when he's needed. I DID bake some instant blueberry muffins to get the grease taste out of my mouth! They weren't very good. It was just the powdered Martha White mix with blueberry pellets, mixed with Farmer H's FREE milk. Still, it took care of the grease.

***
Sioux,
Never, Madam! My ample rumpus is pristine, inside and out!