Remember when I got charged double for my package of shredded lettuce at Country Mart? I'm sure you do, hanging onto every precious word I type for you. Even if it was on my not-so-secret blog. Of course I couldn't let that shredded lettuce go to waste! I used it to make Farmer H pulled-pork nachos. He likes them so much at the casino. And the ones I made at home might cost just a tiny bit less. Even with $7.99 lettuce!
I didn't get a picture of Farmer H's meal, but I DID get a picture of mine, which I made a couple days later. We don't like our chips on the bottom of the nachos. Is that wrong? Nobody wants a soggy chip. So I make all the layers, but leave out the chips, which we have on the side, to dig into the topping. 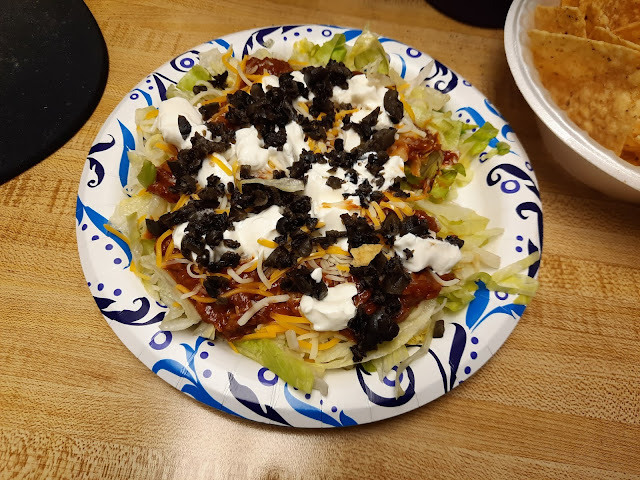 It looks kind of festive on that left-over party plate, don't you think? It's a small plate. Smaller than a regular paper plate, but bigger than a dessert plate. It's a just-right plate. Goldilocks could be their spokeswoman.
Anyhoo... there's a layer of shredded lettuce on the bottom, with a sprinkle of shredded cheese. I think I used the "Mexican Blend" instead of plain sharp cheddar. Not sure what's in it, but it has yellow cheddar and some lighter color cheese. Maybe colby. On top of that cheese is the pulled pork, heated, of course, to melt the cheese. On top of the pulled pork is another layer of shredded cheese. Then some sour cream, and those black olives that I paid 98 CENTS a can for. So disappointing! They were like black olive crumbs, not slices. Doesn't really matter in these nachos.
This dish will be served again. Only The Pony is not a fan.
Posted by Hillbilly Mom at 1:03 PM

It does look festive although I did wonder what those black bits were. I should have recognised them since I chop my own olives to sprinkle over my pizzas. I like colby (Mainland brand) cheese, I buy a small block and slice it for sandwiches.

River,
I'm sure you would have recognized the olives if they were the slices that I ASSUMED would be in the small can for 98 cents. I should have bought the bigger cans of whole olives, and sliced them myself. They keep for a while in FRIG II. Sharp cheddar is my favorite cheese. Farmer H likes pepper jack, and The Pony likes the IMO's Pizza cheese, that I think is provel, which is white like mozzarella.

Could you make me a plate with shredded chicken instead of pulled pork? And, could you leave off the olives? And could you add some sputum to the top, since I am such a PITA of a customer/guest?

Sioux,
Yes. I could do that. I have one baggie of pulled chicken in the freezer of FRIG II. It's only a couple weeks old. I can indeed leave off the olives. Less work for me! No sputum is served at this establishment. You might find an occasional head-hair, but I DO wash my hair every day, so it would be clean... and no extra charge.