There's A New Hub In Town

My dark basement lair is now a tiny bit less dark, and New Delly is firing on all cylinders again! Farmer H must be exhausted.

Sunday morning, I caught him peeking at my new hub! There he was, in his tighty whiteys, standing by the long couch, holding my new hub. I didn't let on that I'd seen such a clandestine act. I was hobbling to the bathroom, and I'm pretty sure Farmer H had just looked outside to see how much snow might be impeding his trip to town for a secret breakfast.

I figured that was a sign that Farmer H must be ready to hang my new hub under the desk in my dark basement lair. After all, New Hub had been laying on the long couch since Wednesday afternoon, and this was the first interest Farmer H had shown him. 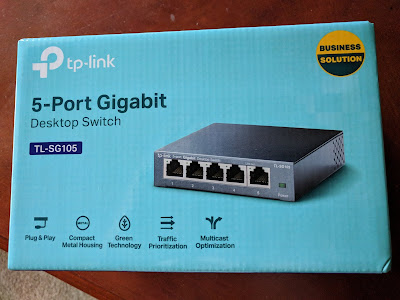 Around 5:00 on Sunday evening, I hollered up to ask Farmer H if he wanted to crawl under my desk with New Hub, or wait another day. He said, "Now is as good a time as any. It will take about 5 minutes." So down the stairs he clomped, cradling New Hub in the crook of his Pop-Arm elbow. And here's the most DISTURBING and SHOCKING development.

When I took out the coily blue ethernet wire from the back of New Delly's tower, and reconnected my red ethernet wire that runs down to the old hub... 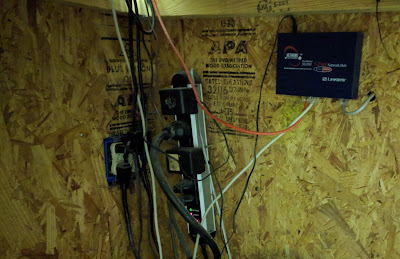 MY PRINTER HUMMED TO LIFE, AND PRINTED GENIUS'S LETTER FROM THURSDAY!

How does THAT even happen? It was like there was totally nothing wrong with that old hub! The connection was perfect. Not flickering. A yellow light and an orange light shone steadily on the back of New Delly's tower, next to the ethernet slot where I plugged the red cord.

I told Farmer H to go ahead and install New Hub. You never know when Old Hub might stop working again. It had been a long week of intermittent connection before he went kaplooey the first time. Now everything is working like it has for years. Properly.

Oh, and Farmer H went down to putter around in his basement workshop Monday afternoon, the minute I went downstairs with my lunch to start internetting. Of course having a thin wall of fiberboard between us was not to his liking. He walked around to talk to me from the door of my lair. And while there, HE noticed that the ceiling light was out, even though I've told him several times, and it was out when he ran the coily blue ethernet cord, and ever since the day we returned from taking The Pony halfway back to college on January 2nd. So he got his ladder and put in a bulb.

Things are getting back to normal.
Posted by Hillbilly Mom at 2:13 PM

Wow, he really got into action. I find it is always better to let them think they are the ones who decided to do the task. Glad you can see things in a whole new light!

Oh My Goodness!
Miracles DO happen!
Buy a lottery ticket!
Hooray for internet and bright light :)

fishducky,
Thanks! It's a great relief to have New Delly's capabilities completely restored.

***
Kathy,
I guess waiting 4 days lulled Farmer H into a sense of empowerment.

***
River,
It does seem like a miracle! Unfortunately, Even Steven saw fit to thwart my luck. I DID buy a ticket. THREE tickets. All losers!