After my disappointing Mo Money Monday, I left home on Too Tardy Tuesday with anticipation. Just like I had on Monday. Sadly, with the same result. I'd been sure I'd find those new Missouri scratchers ensconced in the glass case of the Gas Station Chicken Store. But no. The case was full. But with tickets I am already familiar with. I bought a couple of $3 tickets, NO 44 OZ DIET COKE (not in a fit of pique, but because I had other errands), and went in search of the elusive SHOW ME tickets.
I'd pretty much given up hope. The Gas Station Chicken Store is always the first place to have their tickets out. Casey's and Country Mart might take until the end of the week. But Even Steven was looking out for me Tuesday, because when I stopped by the Sis-Town Casey's to use their bathroom, between the Sis gift drop-off, and my rendezvous with the bank for bond-redeeming purposes... I SAW THEM IN THE CASE!
It was even more important, because The Pony had given me money to buy him some new tickets. He'd looked them up on molottery.com, and was itching to have a $10 and two $5 tickets. I bought them, with the intent of keeping one of the fives for myself. Surely you don't think I'd go a whole day without getting the latest tickets, and then ANOTHER day without one, just so The Pony could have TWO!
They're really pretty tickets. While sitting at the bank drive-thru for 30 minutes, I took pictures, to send to The Pony. An ti ci paaa aaaa tion! 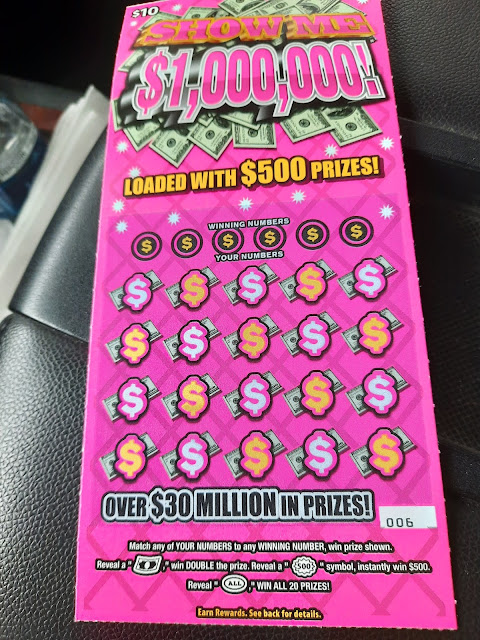 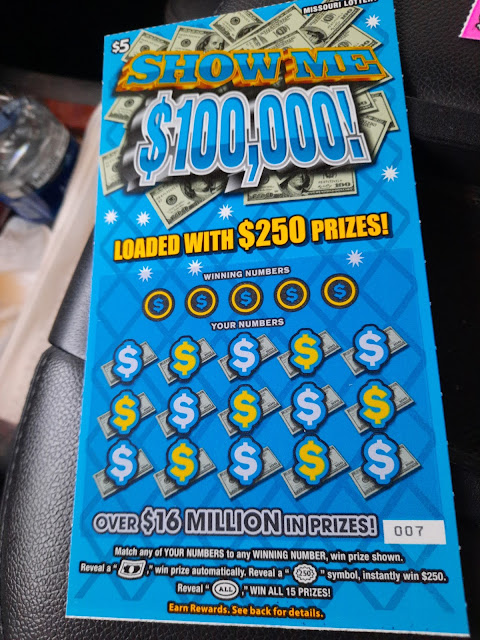 That's the $5, which did NOT want to be photographed, and SHUT DOWN my phone about five times, causing me to do a forced re-start by holding down the VOLUME DOWN and START buttons for ten seconds. 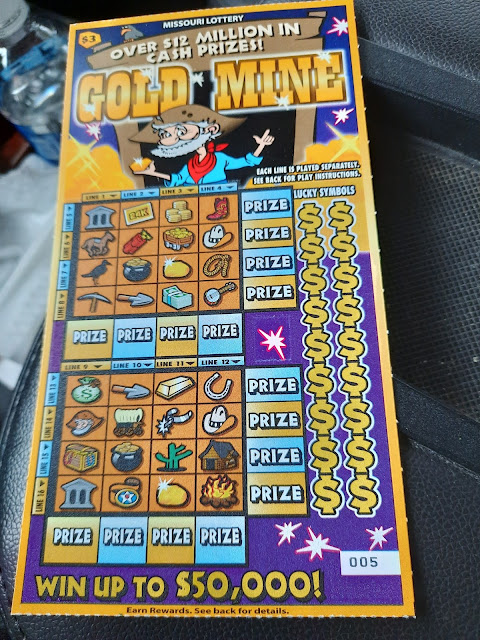 That's the $3, which is not part of the series. You uncover the symbols under the $$, then scrape off the ones you have on your prize grid. Any complete row or column wins the prize.
Let the record show that ALL OF THESE TICKET WERE LOSERS! But I'm glad I had the chance to play on the first day they were out. I got some more on Wednesday. The Pony won $10 on his pink $10 ticket, and $2 on the purple $2 ticket I am going to show below (although it's my loser that I scratched already). I won $5 on a blue $5, and $3 on a $3 Gold Mine. So at least they're paying back! 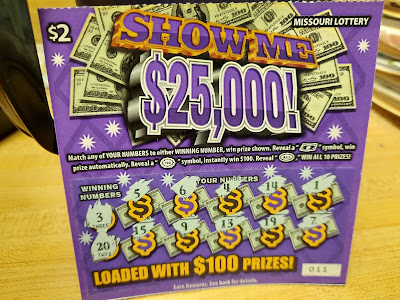 There's also a $1 ticket, half the size of this purple one, in bright green, with a top prize of $5000, loaded with $50 prizes. I won't be buying that green $1 ticket. They're too small to hold onto!
So... our first day, we struck out with the SHOW ME tickets. But the second effort garnered us mainly money back. There WAS a losing blue $5 for The Pony, and two losing $3s for The Pony, and a losing pink $10 for me. But we made more back than my customary 40 percent.
I'll keep buying them until I get bored with them, or they stop paying anything. I really like the $3s.
Posted by Hillbilly Mom at 1:00 PM

Losing $23... I'm sorry about that. You would get a guarantee if you were still working. If you hadn't retired, you would be guaranteed you'd be panicking right now, because on Monday I go back to work.

The colours are pretty, but I'm not at all tempted. I'm leaving my money in the bank this year and only buying food and one pair of sneakers which I only need because the heels are trodden down way past the tread on my current pair.

Sioux,
It wasn't too traumatic, seeing as how $15 of it was money The Pony had given me for the tickets he wanted! He's high-rollin' since his casino jackpot.

If I hadn't retired, I might be incarcerated for a momentary loss of patience! With select faculty, not with students. Sweet Gummi Mary! Now I have to suffer from empathy over your situation. At least The Pony will be having sweet dreams, completely unconcerned...

***
River,
That's a wise decision. You can't go wrong by investing in a good pair of sneakers.

They ARE pretty tickets, but already the hype has worn off. They're not very exciting to play. I bought ONE of the blue ones today. And two of the Gold Rush. The Pony was allowed to choose one, and took a Gold Rush that won $10. I won my $5 back on the blue, and nothing on my Gold Rush.