As if we weren't raking in enough free food from the Ponytail Guy up at Farmer H's storage lockers... Back Creek Neighbor Bev sent Farmer H a text that she had some stuff for him.
"I don't know why Bev thinks she needs to give me canned goods!"
"You said they just got a contract on their house! They're going to be moving, and she's cleaning stuff out. That makes sense."
"Well, maybe. She gave me a bunch of cans. There's watercress--"
"WATERCRESS! Do you even know what that is?"
"Yeah. That stuff they put in Chinese food. The crunchy round things."
"No. That's water CHESTNUTS!"
"Oh. Well. That's what they are. And some soy sauce that might be organic--"
"Any baby corns? I could put that in my leftover Chinese from Friday night! Where is it?"
"Over in the BARn."
"Well, I can't use it over there."
"PONY! Go get your mom that Chinese stuff from the BARn. It's on my workbench. You'll see it. There's about 6 bottles of the soy sauce--"
"I only want ONE bottle of the soy sauce. And the water chestnuts, and the baby corns."
Off went The Pony. He was gone so long that I started to worry.
"He's been gone over 15 minutes! When I sent him for the chicken nuggets, he was back in five. You don't think he fell and cracked his head open, do you? What could be taking so long?"
Farmer H went to the front door and looked. Didn't see him. Went across the yard to investigate. After another five-ten minutes, they both returned. The Pony first.
"NOTHING was where Dad said it was! They were in BAGS, on the floor, across the room from his workbench!"
Anyhoo... here's a picture of my newest free food: 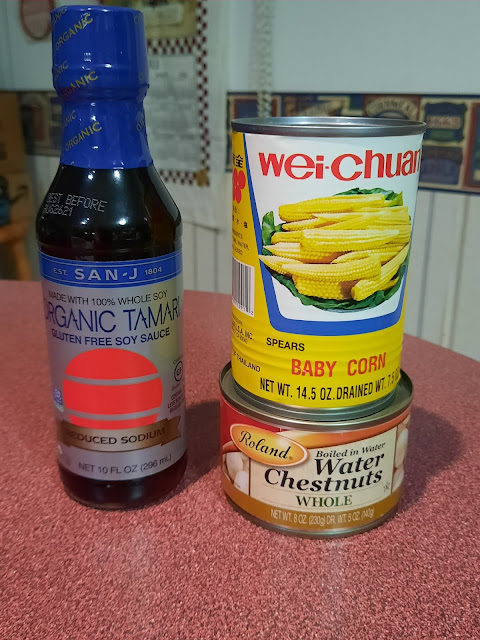 "Check the dates on them, Pony! I've never seen those labels before. I wonder where she got them. Not from Save A Lot or Country Mart. Maybe she ordered online."
"Mom. I'm pretty sure the baby corns are an actual Chinese brand. But the dates are good until 2021 on all of them. You might have to slice the water chestnuts."
"That's okay. I've done that before."
So... I added these ingredients to my leftover Hunan Pork, from which I'd eaten all the pork, and had added cut-up chicken nuggets from the Ponytail Guy's stash. I stretched my Chinese takeout into three extra meals. It could have been more, but I don't eat like a hummingbird! 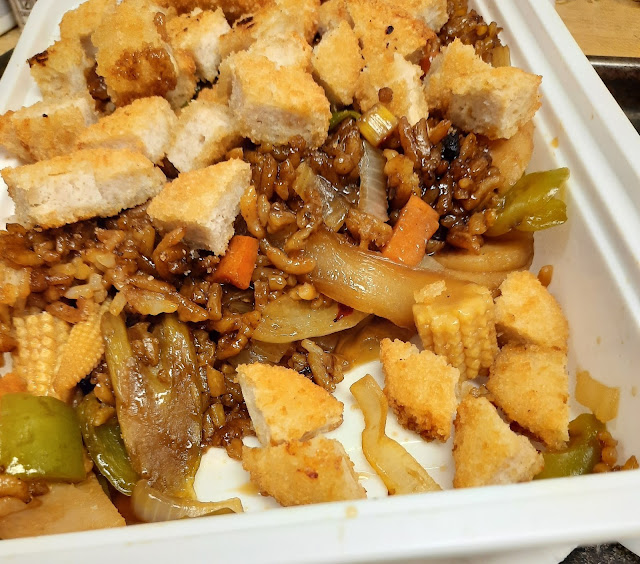 I even put my meal in my Chinese Tupperware! The container that we used to get our carryout in! I had cut up an onion and a green pepper, also from the Ponytail Guy, and microwaved them with soy sauce. I used Farmer H's leftover fried rice, mixed with my leftover white rice. Kind of a Frankenstein parts Chinese dinner. Hunan Ponytail Guy Chicken Nuggets.
It was real, and it was spectacular.
Posted by Hillbilly Mom at 1:06 PM

And that's the pricey tamari that I get at the natural grocers! Yay!

So it's Frankenstein Chop Suey instead of Chicken Chop Suey. It actually looks pretty yummy.

If you were an artistic genius, you could design a label. The brand name? Hunan Ponytail Guy. You could whip up some HPG food when the tours roll in...

rsgtarte (Sheri),
It's good to know that Farmer H scored a bargain! I mean, FREE is good, but free when it's something pricey is even better! And he thinks he has 6 bottles of it!

***
River,
It was really good, with all the textures. Even on the 4th day!

***
Sioux,
IF. If wishes were Ponies, beggars would live in my house for free.

I might have to be careful marketing my Hunan Ponytail Guy. It seems like a product that would attract hipsters. Too many hipsters coming to the tour at Farmer H's Shackytown Boulevard Amusement Park might lead to the gentrification of Hillmomba. We can't have that!