I hate to do this to you. I really do. But I'M GOING TO DO IT ANYWAY!
You may recall that I haven't been going to the Devil's Playground this year. Not since March, and maybe once since then. The Pony does my shopping. So I haven't been keeping up with The People of the Devil's Playground. Farmer H made sure I didn't miss out, though.
"Look at this picture I seen today. It's from a Devil's Playground. I saved it."
"WHAT IN THE NOT-HEAVEN!"
"Yeah. She ain't got no underwear on. Her dress don't even cover her a$$. Now why do they let people walk around like that?"
"Of COURSE you saved THAT!"
"Well. I did."
You know how The Universe has a wicked sense of humor? I came out of the Gas Station Chicken Store on Friday. The Pony was with me, eating Little Caesar's pizza before we got it home. I rounded the corner of the building with my 44 oz Diet Coke and scratchers. As I was putting stuff in before climbing up on the running board, The Pony said,
"Don't look now. Don't look at all. You DON'T want to see that!"
I had sensed the presence of a white car in front of T-Hoe, at the air hose. Nothing unusual. That's a popular place. Most people in Hillmomba seem to have leaky tires. The Pony ducked his head and slapped a palm to his forehead.
"Oh, no..."
Of course I looked.
"EEEEEE! NO! I can't believe that! Get me a picture!"
"I'M not getting you a picture!"
"Get it! You can use my phone!"
"NO!"
"Oh my gosh! He's getting away!"
"Here! Here's your phone. Get the picture!"
"You said not to!"
"YOU wanted one!"
"Oh my gosh! He's LOOKING at me! Isn't he? Can he see that I took a picture?"
"I don't know. Give me the phone!"
The guy drove off. The Pony checked to see if I got the photo.
I did. 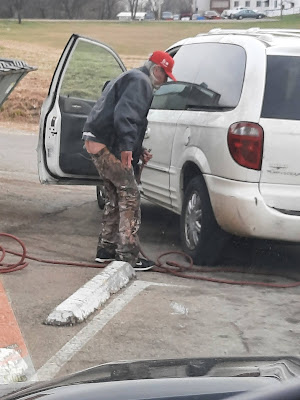 Back at the Mansion later that evening, Farmer H was pontificating in his recliner.
"Oh! I took a picture to show you today, at the Gas Station Chicken Store! Here. Look."
"Huh."
"That's all you've got to say? YOU showed ME a picture of a butt hanging out. Now I'M showing YOU one."
The Universe does truly have a sense of humor. It just happened to be Farmer H's birthday.
Posted by Hillbilly Mom at 1:04 PM

It's entirely possible the Devil's Playground girl was wearing thong underwear, so her butt cheeks were bare. It's also entirely possible that she wasn't wearing even a thong, preferring that fresh air feel.
I once saw a picture of a Devil's Playground girl, sized to excess, squeezed into the tiniest pair of white shorts I had ever seen. How she managed to get them over those thighs I'll never know and of course they didn't cover her but either.

River,
I am not a fan of folks showing their butts all willy-nilly! There needs to be a regiment of Butt Police on patrol in Hillmomba. But at least I got sweet, sweet justice when I made Farmer H take a look at my picture without telling him what it was!

I told The Pony that I bet this guy was a retired plumber. His response was that now I had a P0RN file on my phone! Which seems to be a non sequitur-ial faux pas on The Pony's part.

You might expect the low riding pants from the younger generation, but they wear boxers to show off. This old guy is old enough to know better. You would think he would want to pull them up just to keep his cheeks warm!

Kathy,
I bet Farmer H could find this guy some drawers at the auction or the storage unit stores! The Pony could toss them out T-Hoe's window as we drive by!