Even Steven Delivers An Egging

I thought Christmas Dinner preparation was going to be a breeze. After all, I was making less dishes than Thanksgiving, and I had The Pony for help. Farmer H had decreed that we'd be eating the Ponytail Guy's meat, in the form of a FREE four-pound ham.
Some people got an actual four-pound ham in their food box that weekend at the Storage Units. But the box Farmer H got had a red voucher for a four-pound ham from Save A Lot. It was just a scrap of paper, but with a signature, and a crimped little design like it had been pressed with a seal. Of course Farmer H expected ME to be the one to bring home the ham. I went in for just that purpose. Nothing else. The voucher said I had to talk to the manager. I figured they'd find a manager for me when I showed the voucher.
I'd seen some hams in an open bin at the back of the store, by the meat department. I picked one out that was 4.12 pounds. It's not like they had trimmed them all to four pounds exactly. The one I found was a fresh ham. Mmm... I love a fresh ham, with a little rim of fat around the edge. I didn't have much hope that I'd be getting that ham for free, but I took it up front in the child seat of my cart/walker.
"I have this voucher for a free four-pound ham. I didn't know which kind it's for. Is it just ANY ham? Can I pay the difference in the weight?"
"Oh! I know exactly what you need! Give me the voucher."
Off she went, to a little room up front, between the registers and the door. Back she came within seconds, with my four-pound ham. She took the one I had put on the conveyor, and said,
"Here you go! And we give this to the butcher."
She handed my delicious fresh ham in its net bag to a man walking by. Like a championship relay team handing off the baton. He headed for the back of the store. She handed me my four-pound smoked pressed ham. It looked like a football with rounded ends.
I'm not saying the FREE smoked pressed ham isn't good. It's good enough. We cut it in half, froze part, and baked it in a water bath, covered with foil, for 20 minutes. It was pre-cooked anyway. It warmed all the way through. Farmer H sliced it. We each ate a slab with Christmas dinner, and are now enjoying sandwiches. For a NOT-FRESH ham, it is adequate.
My only real preparations were the 7 Layer Salad, and the deviled eggs. Which I made on Christmas Eve day. The salad went well. I sliced and diced the green onions and boiled eggs, grated the block of Ponytail Guy FREE cheddar, and cut the Ponytail Guy FREE bacon with scissors at the kitchen table. Then I compiled the layers at the kitchen counter, using a bagged Caesar salad kit lettuce because once again, no romaine was to be found, and the thawed frozen peas, and the mayo. I had saved this salad-making for last, because I knew the deviled eggs would take two hours.
Sweet Gummi Mary! I thought I might shave a half-hour off that time. The first of the 2 dozen eggs peeled like a dream! The first 8 eggs slipped right out of their shells, like a tipsy floozy out of her clothes on a hot date with a well-heeled heel. I was anticipating a new record for egg-deviling. Was mentally engraving my award plaque when it happened!
The 9th egg refused to shed its shell! It held on tighter than snapping turtle waiting for thunder. I have no idea why the next set of eggs would not peel. They were all boiled in the same pan, at the same time. I can only surmise that I had a good dozen, and a bad dozen. 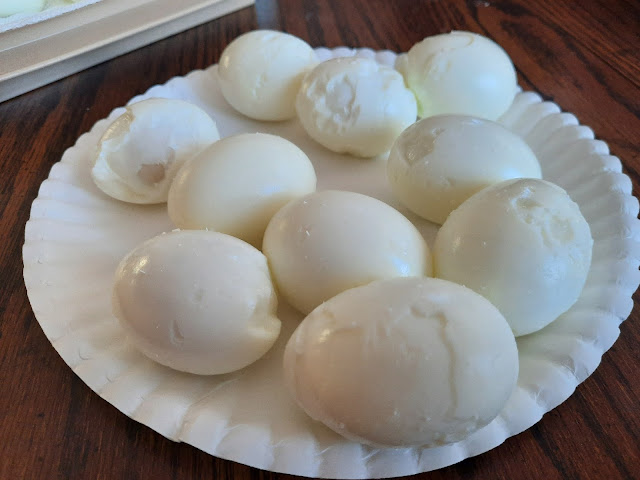 These were the worst. I set aside 8 of them for dicing into the 7 Layer Salad. The others were pretty enough for deviling. 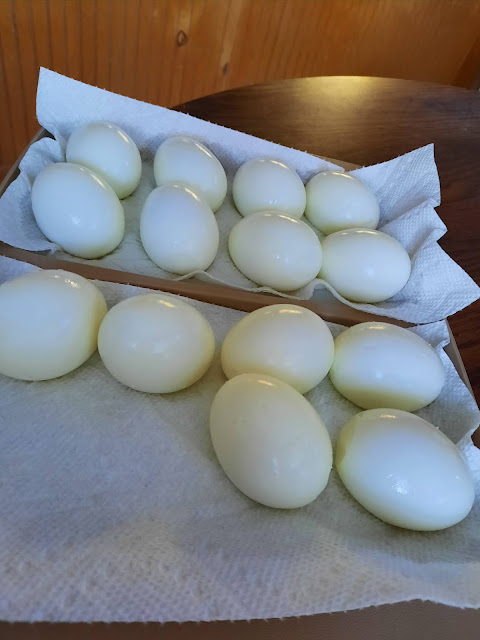 There they are, resting on paper towels in the deviled egg tray, releasing excess moisture before I cut them in half. 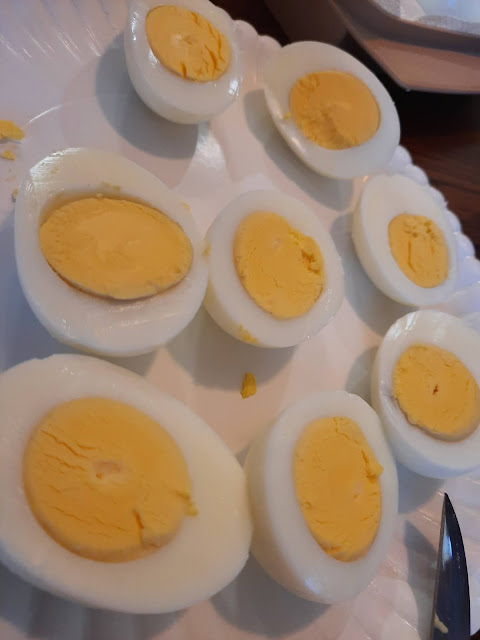 They were cooked perfectly, except maybe the one in the foreground, which could have used another 30 seconds in the roiling pot.
I forgot to get a picture of the completed dish. I'm sure you can understand how my mind might have been foggy, after my two-hour egging.
Posted by Hillbilly Mom at 1:03 PM

You could have at least warned me that if I scrolled down, I would encounter a horrifying sight.

Hard boiled eggs cut in half, with their yellowish yolks dry and crumbly and their whites slick and slippery.

At least you left out photos of the finished deviled eggs, with their whipped-up yellow centers displayed in the jiggly white cases.

BTW, it looks like Genius could jump into the pool from his balcony? Can he do that (of course, when it is NOT frozen)? Has he done it? Each time he takes a picture from that vantage point, it's a good one.

Sioux,
No warning for you, Madam! It's not as if I'm showing FEET! But I must add that the whites were EXTRA SLIPPERY this time, and the yolks perfectly crumbly!

***
Sioux 2,
Genius COULD jump into his pool, but it is only waist deep. So he'd be maimed and possibly comatized for life. It's an adult kiddie pool. For cooling off and looking cool, not for chicken-fighting and cannonballing.

***
River,
How thoughtful of you to cater to the likes of Sioux, by not displaying your eggs on the innernets to force anti-egg-ites to seek their safe space!

Is Genius allowed to skate on the frozen pool?

River,
I don't think so. But in the summer, he's allowed to have alcohol at the pool, as long as it's not in a glass container. That's much more important to him than skating!

I hate the eggs that do not cooperate!

Kathy,
I'm really glad I got the first 8 eggs peeled so easily. So these couldn't be a bad EGGSample!!!