Yogurt was part of the FREE food in boxes that a Ponytail Guy brings to Farmer H and his cronies up at the storage units. I know I told you about the individual Dannon Strawberry Yogurts. They expired on December 5. We ate all but three of them. I'd say we probably had about 24, maybe more. Farmer H would bring them over to FRIG II about 8 at a time, and we'd have them as dessert. But not The Pony. He's not a fan.
This newest yogurt, of which we have three giant containers, is good until February. It's plain yogurt. I've used plain yogurt in the past, as a topping for baked potatoes, instead of using sour cream. But it's not something I'd sit down and eat as a snack or dessert. I'm not a fancy cook.
I thought about adding fruit, like blueberries. That might not have been sweet enough for diabetic Farmer H. Besides, I'd have to wash them and pick out the shriveled blueberries and pull the stems off the ones that still had them. So I thought about other flavors of yogurt we've had before, and decided on CHERRY! I knew that I could pick up a can of cherry pie filling at Save A Lot. It doesn't get much easier than that! Just open the can, and stir it in.
Let the record show that this was a GIANT tub of yogurt. TWO POUNDS! And a big can of cherry pie filling, too! 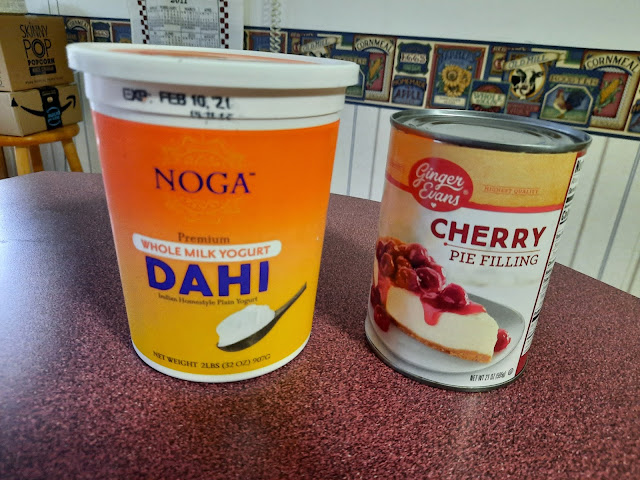 The fine print on the yogurt said it is INDIAN STYLE. That made me pause. Does this yogurt sit in the tub with its legs folded, Indian style? Did Indians use yogurt a lot? I don't recall seeing any special items on the menu in the restaurants at the Indian casinos in Oklahoma. They had fry bread. That's a thing. But nothing yogurty.
THEN it hit me! That must mean dot, not feather! People from INDIA! I don't know much about their cuisine, except that it's spicy, and a lot vegetarian, and I think yogurt is used for some sauces. Don't hold me to that! You know my vast knowledge of world geography and cuisine... But I DO know words, and upon closer inspection, that brand name DAHI looks kind of Indian from India. 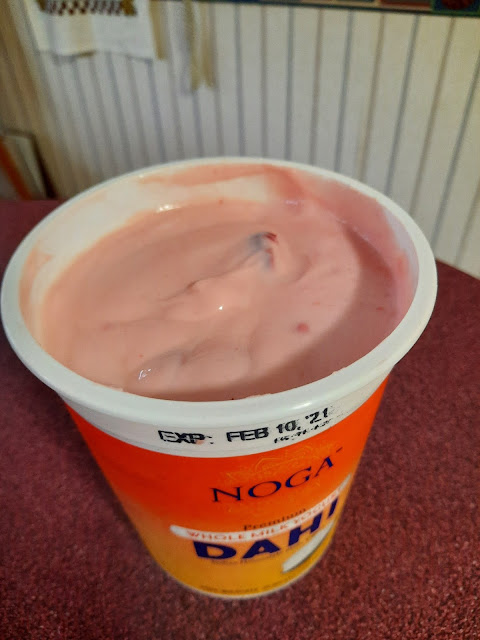 This is the state of our cherry yogurt right now. The first night, I spooned out plain yogurt into two bowls, and added some of the cherry pie filling to them. Stirred them up, and Farmer H and I feasted. That left room in the tub to add the rest of the can of cherry pie filling. It came out just right. I'm betting that it will be even more delicious after marinating together for a day or two.
Farmer H had the nerve to make a face upon sampling my cherry yogurt! I guess he was expecting ice cream. To me, it tasted exactly like the prepared small containers of cherry yogurt I've bought at the store. Just sweet enough, but still yogurt. And with generous whole-cherry chunks in ours!
Heh, heh! I find it fitting that Farmer H got the pit! He hollered from the living room,
"Be careful when you eat your yogurt! I found a pit in a cherry!"
Even Steven is quite protective of me. And has a sense of humor.
Posted by Hillbilly Mom at 1:05 PM

It's definitely dot Indian, they use a lot of yoghurt. That's the same size yoghurt I buy, except mine says 1kg, which is actually 2.2 pounds. I get the vanilla flavour and add whatever fruit I have at the time. I never thought of adding pie fruit from cans but I'll look around and see what's available here. Most often I'll add sliced bananas or strawberries.

River,
This is just plain, I think. Not even vanilla! I am not a fan of vanilla. I just had some with my supper, and my own cherry creation is indeed more tasty than the initial bowl when I stirred it together. If your version already has vanilla flavor, the pie filling might make it too sweet.

I always thought that yogurt takes a long time to "spoil." I mean, isn't it milk that's already been pushed to its limits? (I know I've eaten yogurt that was long past its expiration date and--unfortunately for others--I'm still here, and never got sick.)

I've used the plain yogurt as dip, too. Adding envelopes of "dip" mix makes it edible. For breakfast, I add fruit, spinach, a carrot and some milk to plain Greek yogurt, and it makes for a healthy smoothie. (It took getting used to.)

Mashed bananas (especially the black-skinned and extra-sweet ones, to save them from the trash) could be added. Blueberries or blueberry pie filling. The possibilities aren't quite endless, but almost.

Sioux,
My former colleague, Arch Nemesis, a fellow science teacher, was renowned for eating the expired GoGurt tubes at the teacher lunch table. She'd go around the cafeteria, asking kids for theirs if they didn't want them. Then pile them up for US. I remember one was over a month past the date.

You could open a chain of Bubba Gump's Yogurt shops! So many varieties possible.

I thought about the sweetness and if I try the cherry pie filling I will buy plain Greek yoghurt.
Yoghurt will eventually go bad, but for a long while it just gets more sour.

River,
The cherry pie filling would be the perfect match, to counteract extra sourness! It's really sweet! But you can adjust how much you put in at first, to your tastes.