Fortune Smiles Upon The Pony, While Saving Grimaces For Mrs. HM

While I can't get a reasonably accurate fast food meal served to me, The Pony might as well be seated on a throne above the dining area, with silver service and a white linen tablecloth, perhaps a nine-branch filigree candelabra, and eager waitresses coming in on their day off just to fan him with palm fronds.
The Pony stopped by Wok N Roll, our newest Chinese restaurant, this week when he was released early from work. It's in the same building as the old Chinese restaurant that The Pony sorely missed, since it closed while he was away at college.
There are only four tables for dining in. Most of their business is carry-out. They have a drive-thru, just like the old one, but the wait is sometimes 30 minutes. You can call ahead. The Pony didn't mind waiting. He was taking a load off his hot hooves. He brought home his leftovers for me to try.
"It's garlic chicken. There's a little bit of meat left. I don't like the big chunks of broccoli and green peppers, or the mushrooms. And there's rice."
Indeed there was! 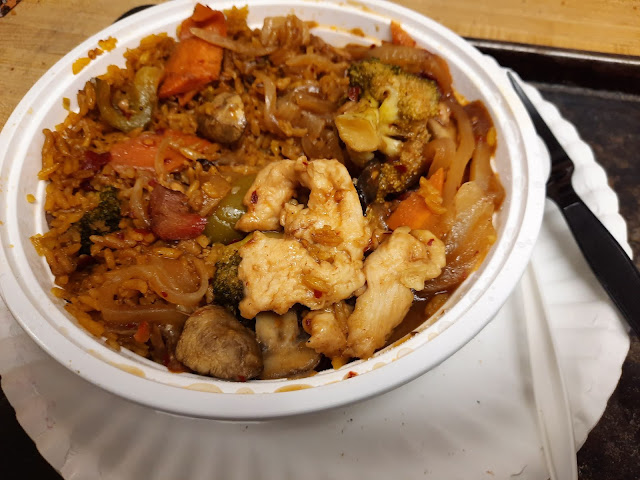 The Pony must have also ordered a family serving of crab rangoon, because it looks like he hardly ate anything but the chicken. He's not a dainty feeder. This was delicious! A little greasy on the fried rice, but I usually get mine with white rice, so it might have been normal. There were also big hunks of pork in the fried rice.
The restaurant has a website and Facebook page with a menu somewhere. From reading the comments, it seems like they are not a chain, just family-owned. They are closed on Sundays now, to prep for the week ahead. I guess it takes a lot of chopping for those vegetables! Although the carrots looked like standard Chinese meal carrots, so they might buy them in bulk. The broccoli, though, WAS quite large, and I assume hand-cut.
Anyhoo... not only did I enjoy the Pony's leavings with gusto, but I am in love with the container! Now I have new Chinese Tupperware! It came with a clear lid. Not flat, but raised-up. So maybe The Pony DID have a lot of food in that bowl.
We've already told Farmer H he will be picking up food for us there. He says he's an order-and-wait kind of guy. No call ahead and drive-thru for him! He only recently started asking Casey's to make our pizza for later pickup. We know how THAT turned out...
Posted by Hillbilly Mom at 1:05 PM

More family china to pass on when you pass on... in thirty or forty years.

So he ate ALL the crab rangoon, and didn't have room for his dinner? Smart boy. The crab rangoon is the best part of a Chinese meal.

That's the leftovers?? Looks like the full meal to me, but that's what you get with Chinese food. Whopping portions. over here the 'chains' have a selection of containers to choose from, clear plastic rectangular ones and I usually choose the middle size because I know it will be packed full.

Sioux,
I have a feeling that china will be passed on sooner! I am ASSuming about the crab rangoon. I haven't had time to ask. But he would never have Chinese without crab rangoons.

***
River,
That's what I thought! I guess he picked out the chicken and the water chestnuts and possibly baby corn if it was included. We can choose the LUNCH special, or the DINNER special. The dinner special is larger, and comes with two sides: rice, and a choice of a couple crab rangoons or an eggroll.

The other Chinese Tupperware I have is rectangular. I usually get two meals, sometimes three out, of a dinner serving.