Farmer H agreed to pick up mousetraps to capture the invader I encountered in the NASCAR bathroom (next to my dark basement lair) on Monday night. Then he delegated the trapping duty to The Pony. I heard him trotting down the steps around 4:30.
"Mom. Where do you want the last two traps? Dad said to put one by the basement door, and one by the door to his SAFE room. He says they try to get in there."
"How does he know that? Do they knock? What could be in there that they'd want? An old pressed-wood roll-top desk, and some knives and classic toys from Grandma's basement?"
"I don't know. But that's what he told me. Do you want this one over here? By the door to your office? Where you won't step on it? And maybe one under your desk?"
"Wait a minute! What IS that? It's so GREEN!"
"Dad got sticky traps. They're REALLY sticky! I got my hand stuck on them carrying them around."
"No. It won't run along there. Put it at the corner, under that cabinet. And the other one you can put in the bathroom, at the corner of the sink cabinet and the wall, where I first saw it. I don't want one under my desk! I can't sit here, thinking there might be a trapped mouse watching me. Or I might put my foot on it."
The Pony did that chore, and headed back upstairs. When I went up to make supper, I questioned Farmer H on his choice of traps.
"I thought you'd get one of those cardboard kinds that they run into. Then you throw the whole box away. WHY would you get sticky traps? After I told you that story about the Man Owner of the Gas Station Chicken Store, and the mouse feet!"
"I thought they'd be the easiest. I bet we catch us a mouse tonight!"
"I don't think it will happen THAT quick! Am I going to hear mice screaming? Will they make a noise if they're stuck and struggling?"
"They ain't gonna be happy, that's for sure! They might squeal."
I was kind of nervous through the night and early morning. I glanced at the two traps in my area every time I went by them. It was a bit disconcerting to think that I might be on the toilet with a stuck mouse watching. But the traps remained empty.
Wednesday afternoon, The Pony carried my lunch down to my lair.
"I'm going to check the traps. Dad said to."
I was changing into my lair clothes when I heard The Pony chattering in the living room. Farmer H wasn't home, so I figured he had news for me. He did.
"I went to check the trap in the workshop, by the basement door. There's something IN IT! But I'm not sure what it is."
"SEE! I told you it didn't quite look like a mouse! Is it a mole?"
"I don't know. It's brown. And furry. But it has three lumps."
"Three LUMPS? It must be contorted from trying to get loose."
"Are you sure it was a mammal? Not a big furry spider?"
"YES! I know it was a mammal. But I didn't see the tail, and it's the wrong color compared to other mice."
"Come down and look!"
"Why would I do THAT? I don't want to think about it, right before my lunch. Is it moving?"
"Not that I could tell. I'll get you a picture of it. But I'm NOT throwing it away. THAT is Dad's job!"
Are you ready? Here it comes! Let the record show that this is the unbreakinable (except to vermin) heavy metal exit door from the basement workshop area to the under-porch area that leads to the back yard and POOLIO. Farmer H has stuck up some pink foam insulation on the concrete walls. Sloppily. Outside, there's a concrete retaining wall, and every leaf in Hillmomba swirls in a pile, waiting to get in like disco freaks in line on a 1977 Saturday night at Studio 54. Farmer H is not keen on sweeping them out once they gain entrance. I don't go by that door. It's his job to maintain his workshop exit.
Anyhoo... here's the critter. It looks bigger in the picture than in person. The bright green sticky part of the trap is about 4 inches by 2 inches. 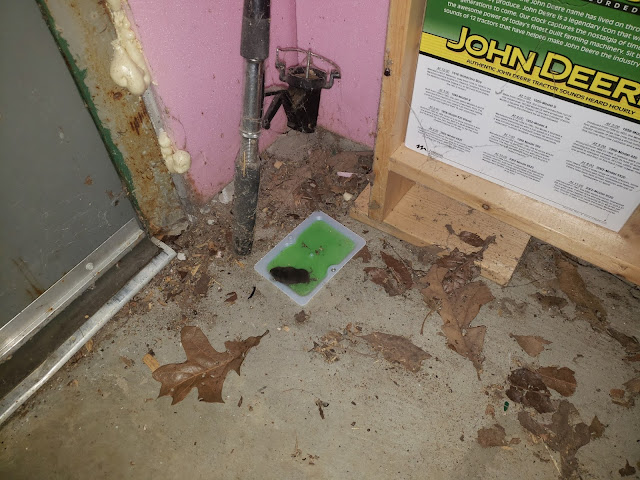 In case you want a close-up to decode this mystery: 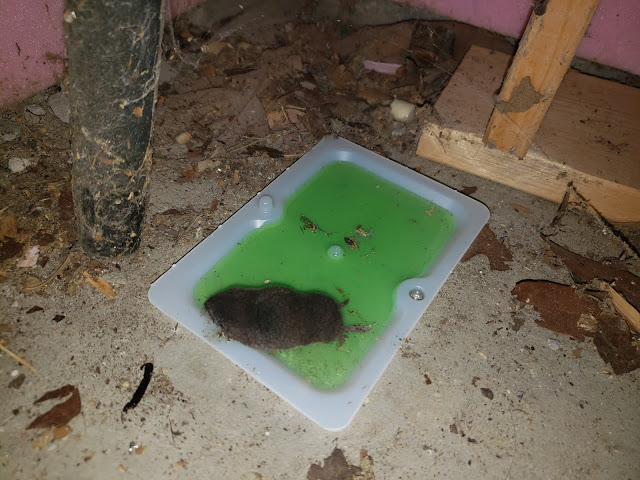 The Furry Scurrier is less than 2 inches long. The tale of his disposal tomorrow...
Posted by Hillbilly Mom at 1:07 PM

Ewwww. Those sticky traps are good for catching crickets too.

I have no idea what that could be, unless it's a mutant tail-less mouse, but at less than two inches long, it probably isn't. Do cockroaches grow fur coats in your winter?

Unknown,
We DO have crickets in the basement. Must be too cold for them to chirp right now. I've seen 2, but never heard them. They have been dispatched forthwith, courtesy of New Balance, right foot.

No crickets have been trapped. But upon enlarging that sticky trap photo, there's a mosquito-like insect with a humongous proboscis!

***
River,
At least you didn't see that critter LIVE, in-person! If I hadn't already arisen from the throne, it might have scared the pee out of me!

I don't think the cockroaches have outerware. Except for their exoskeletons, of course! That's one pest we haven't had a problem with.

I vote for vole. The snubby-stubby front part of it. The no (visible) tail.

Sioux,
That is possible. It looks chunkier than other voles I've seen (not around here, but in a school setting). I think of them as more streamlined. Or maybe this one was obese.

It's PREGNANT!!!! Or ... it WAS pregnant and now there are babies waiting for their mom somewhere in your basement. I could do an entire story about how they waited and waited, until finally one of the litter rose to the occasion and would go out to search for food to keep them all alive as they planned and schemed REVENGE!!!!! The dead one's name is Molly.

Kathy,
NO! NO IT WASN'T! You are welcome to take over the "Molly" series of children's books. Just hope none of the little tykes Googles "MOLE" and sees a full-grown version...